11 little-known US parks worth visiting

New York, Mexico, Los Angeles, and other major cities are called the pearls of the United States for a reason. But if all the sights of big cities have already been explored and you want to get acquainted with the real nature and beauty of the United States, then it is worth visiting the National Parks, which amaze with their beauty and grandeur.

In addition to all parks known for tourists to visit, there are also those that have remained without due attention. Let’s take a look at the top 11 little-known US parks worth visiting.

In the state of South Carolina, in the southeast of the United States, there is a national park called Congaree. It is unique for its coniferous forests, which have no analogues in the country. The growth of conifers here reaches 160 pounds. The territory of the park is 88.5 km² of bog area, for convenience, laid with wooden platforms.

While walking, you can meet a variety of animals: lynx, deer, wild boar, black bear, coyote and others, alligators and turtles live in the water, and snakes crawl everywhere on the ground. For guests in the park, accommodation services are provided, in the form of camping, canoeing, kayaking and other entertainment for a memorable vacation. Therefore, before starting to gather in such famous parks as “Redwood” and “Sequoia”, visit “Congaree”.

Craters of the Moon National Monument

Visiting this national park, which is located in Idaho, you can feel like a real astronaut who visited the moon. In the visitor center, tourists will be shown an exposition of the origin of local volcanoes and will also be told about what may await in the future.

The main territory of the park is located around the main cones, which originated from 15 to 2 thousand years ago. You can see deserted fields of solidified basalt lava, caves, lava cones and monuments at an altitude of 1800 meters above sea level. There is also an observation deck in front of the entrance to the park, which will allow you to appreciate the entire landscape from above. 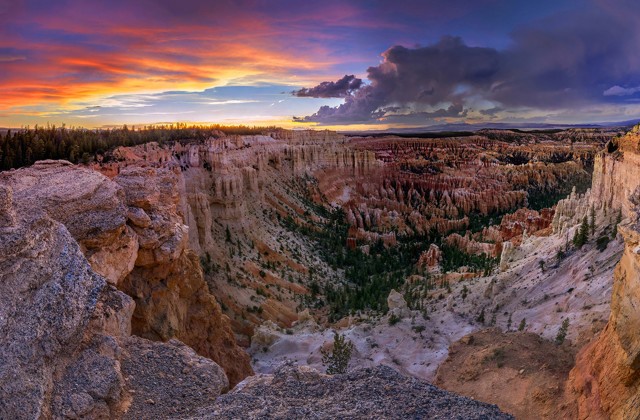 A picturesque national park located in the southwest of Utah. It is unique for its geological formations – hoodoo, which was formed for millions of years at the bottom of the ancient Claron Sea. They look especially great in the rays of the setting sun. Also interesting for tourists is Bryce Canyon, which captivates with its views. Other features of the park are natural windows, which are an integral part of hoodoo, and natural bridges.

See also  How Bernarr McFadden Changed America: Telling the Story of the Founder of America's Most Successful Media Empire

Throughout the park, there is a scenic 25 km long road with several observation decks, at the end of which is the Rainbow Point viewpoint. The height of Bryce Canyon is 2400 meters above sea level, and the highest point is at 2700 meters. In general, for unforgettable and breathtaking landscapes, it is worth going to Bryce Canyon.

This national park, with an area of ​​340 km², is located in the state of Colorado. On its territory there are magnificent sand dunes, which are 12 thousand years old and 230 meters high from the bottom of the valley.

There are also many lakes, fields and marshes, as well as a wide variety of animals. It is better to walk around these places with a compass or a guide; due to the constantly changing landscapes, no marks and signs are put here. For those who want to enjoy the scenery not only during the daytime, but also at night, there is a camping and a tent city in the dunes. The Sand Dunes will forever leave their mark on memories, so it is worth taking the time to visit them.

To the west of Key West, Florida is a very special national park. Fort Jefferson became his property – the largest coastal fortification, which was built in the middle of the XI century and was never completed. You can get to Dry Tortugas only by ferry or seaplane.

There are also organized excursions, which include both entertainment and sightseeing programs. The park is known for its abundance of marine life, tropical birds, extraordinary coral reefs and many legends. Here you can even indulge yourself in swimming underwater. If you want to see incredible underwater worlds, get acquainted with the large fortress and the islands that surround it, Dry Tortugas is the ideal place to visit.

The longest underground tunnel system in the world is located in Kentucky. This kingdom of underground lakes, waterfalls, streams and canyons with many halls can be called a place of secrets and paradoxes. New caves and passages are constantly being found here, so the real size of this park is still unknown. Guided tours of the site can range from one to six hours and are conducted using paraffin lamps only. If you have free time, you can do your own exploration of the cave, as well as go horse riding, fishing or rowing on the territory that is located on the surface of the park.

Kings Canyon Park, located in the southern part of the Sierra Nevada in California and is bordered by Sequoia Park. Certainly will be able to please the lovers of hiking and multi-day hiking in the mountains. The area of ​​the park is 1869 m².

There are many beautiful places here: Panorama Point, Zumwalt Meadows, Hume Lake, Grant Grove, Screaming River and Roaring Falls. For those looking to stay for a couple of days, the canyon has several campgrounds and even rustic lodges. An excellent type of outdoor activity for lovers of long walks in the fresh air.

In the heart of Arizona, not far from the city of Holbrook, there is the most unusual park – “Petrified Forest”. This place can be called magical, because here you can find real petrified trees. 220 million years ago dinosaurs lived here, in the cracks of giant trunks you can see crystals of pink amethyst and milk quartz, which replaced wood in the process of decay.

The forest landscape is constantly changing, despite the rare rainfall. Walking through the Petrified Forest is a real excursion into the past, you can walk around the places where dinosaurs once roamed. A visit to this place will bring a lot of pleasure and an incredible experience.

In California, there is a park with the frightening name “Death Valley”. This name was given to the park due to the death of an entire colony of treasure hunters from lack of water in the 40s of the XX century. However, despite the daunting name, there is a lot to see here. It is the hottest place in North America, despite being the lowest point (86 meters below sea level). Death Valley is a 225 km long intermontane depression located in the desert. Here you can see mountains changing their color depending on the time of day, and enjoy beautiful views.

You can also see the Scotty Castle, located in a small gorge and immersed in greenery and look at the Ubehebe crater, formed by the meeting of magma and groundwater. Abandoned cities have also become original monuments of the development of the valley, which can also be viewed. A visit to this park will not leave anyone indifferent.

One of the most inaccessible parks in the United States, Big Bend, is located in the south of Texas. It is home to hundreds of bird species and about 1200 plant species. Most of the park is occupied by the Chihuahuan desert, in the middle of which flows the Rio Grande, surrounded by green floodplains. Visitors to the park are provided with a wide variety of recreational activities: hiking, kayaking and mountain biking, horseback riding and car trips, fishing.

The park is 380 km long. It has everything you need for tourism: small cafes, barbecue and camping sites. A great holiday destination for those wishing to explore the flora and fauna of Texas.

Located in South Florida, the Everglades Park is a wildlife sanctuary nestled in swamps. The park occupies about 20% of the total area of ​​the Florida swamps. It is home to a variety of plants, from cypress trees to water lilies and mangroves.

The Everglades are also very rich in fauna. Here you can find many fish, alligators, cougars, white-tailed deer, otters and a huge number of birds of different types and sizes. You can travel around the area on foot, by car, bike and kayak. Several companies offer airboat safaris. Lovers of wildlife can stay for recreation in organized campsites. A wonderful and memorable outdoor recreation is provided for those who visit the Everglades.

We’ve covered some of the most underrated national parks in the United States. However, America is famous for its many nature reserves, national parks and zoos that cannot be covered in one article. If you are traveling in the United States, it is worth making a list of attractions you want to visit in advance. Each national park is a real monument of history, with its magnificent and unforgettable views, flora and fauna. Any of them will leave vivid impressions and memories about themselves.