Who does Christmas spirit better than New York? The famous poem ‘Twas the Night Before Christmas’ was supposedly inspired by the festive atmosphere in one of the city’s downtown markets in 1822, and, according to Miracle on 34th Street, yes, there is a Santa Claus, and he presides at Macy’s.


Unsurprisingly, some of New York’s Christmas landmarks have turned into well-worn touristy ruts, yet are somehow still worth every second, but there are some definite dos and don’ts. 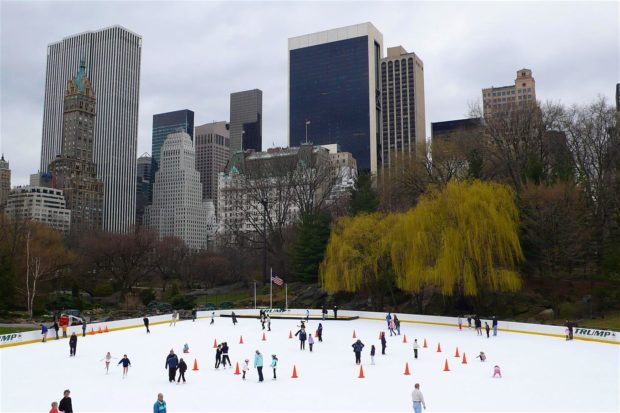 DO go ice skating at the Wollman Rink in Central Park. Image by Bekhap / CC BY 2.0DO go to Rockefeller Center Plaza (aka the Capital of NYC Christmas) to see the big tree – which has appeared since 1931, these days boasting around 50,000 LED lights – and snap a photo or two. It’s worth fighting the crowds, particularly after dark when the lights bounce off the bare shoulders of the golden Prometheus statue. Lights click off at 11:30 pm through Christmas, then at 9pm through New Year’s Eve.

DON’T skate the ice rink here. It’s tiny, expensive ($32 + $12 rental), and lines regularly take up to two hours to get ice time. Save the skating for after January 4 (when there’s a shorter wait and off-peak rates are cheaper), or go to Central Park’s Wollman Rink, which is bigger, slightly cheaper ($12/$19 weekdays/weekends + $9 rental) and equally atmospheric.

DO embark on some last-minute Christmas shopping at the Union Square Holiday Market, where you can pick up unique items from local craftspeople and artists. The market operates daily from November up until Christmas Eve.

DON’T even consider braving the crowds swarming the stores around Times Square. There’s no quicker way to kill the Christmas spirit.

DO go see Macy’s elaborate Santaland – a stunner of a scene of Christmas trees, elves, toy trains and snow-filled wonder. It’s also still home, per Miracle on 34th Street and the store’s hotline (tel +1-212-494-4495), to the ‘one real Santa Claus.’

DON’T go on weekends, or midday any day. Show up before it opens (10am) and you’ll only have to wait five minutes, or come an hour before closing (doors shut at 10pm Monday through Saturday and 9pm on Sundays). And, heaven forbid, don’t tug on Santa’s beard. That thing’s genuine!

DO go and see the Rockettes do their glittery thing at the Radio City Christmas Spectacular. Image by Ralph Daily / CC BY 2.0

DO see a holiday show. St John the Divine’s Winter Solstice celebrationis a beloved, and rather secular, concert series (this year December 14–16), while Radio City Music Hall’s Christmas Spectacular is the show every NY kid sees growing up, with dozens of dancing Santas and the line of Rockettes a-leg-kicking.

DON’T forget the other boroughs. The Barclays Center in Brooklyn is hosting an in concert screening of Tim Burton’s The Nightmare Before Christmas with a live orchestra and full choir, while the New York Botanical Garden in the Bronx has one of the city’s great Christmas traditions, the Holiday Train Show, with a quarter-mile toy train track passing BY icons like the Brooklyn Bridge, the Statue of Liberty and St Patrick’s Cathedral, built with leaves and other natural materials.

See also  Woolworth Building: The Mother of All Skyscrapers is Almost 110 Years

DO window-shop. Boutiques and department stores across the city dress up for the season.