NYC is known for its towering landmarks and soaring buildings. But it turns out some of the Big Apple’s biggest standouts are actually tiny.

The city is so famous for its towering skyscrapers and colossal billboards that it’s easy to overlook the tiny things that make the city so grand.

But if you poke around in its nooks and crannies, you might decide it’s actually the little things and places that tell the real New York story. Because, as any traveler knows, you don’t get to know a city by taking an elevator to the top of its tallest building or shopping in its largest department store. You get to the heart of a place by taking the time to notice spots that most tourists overlook.

Here are 11 of the top tiniest standouts that will make you see the Big Apple in a whole new way. 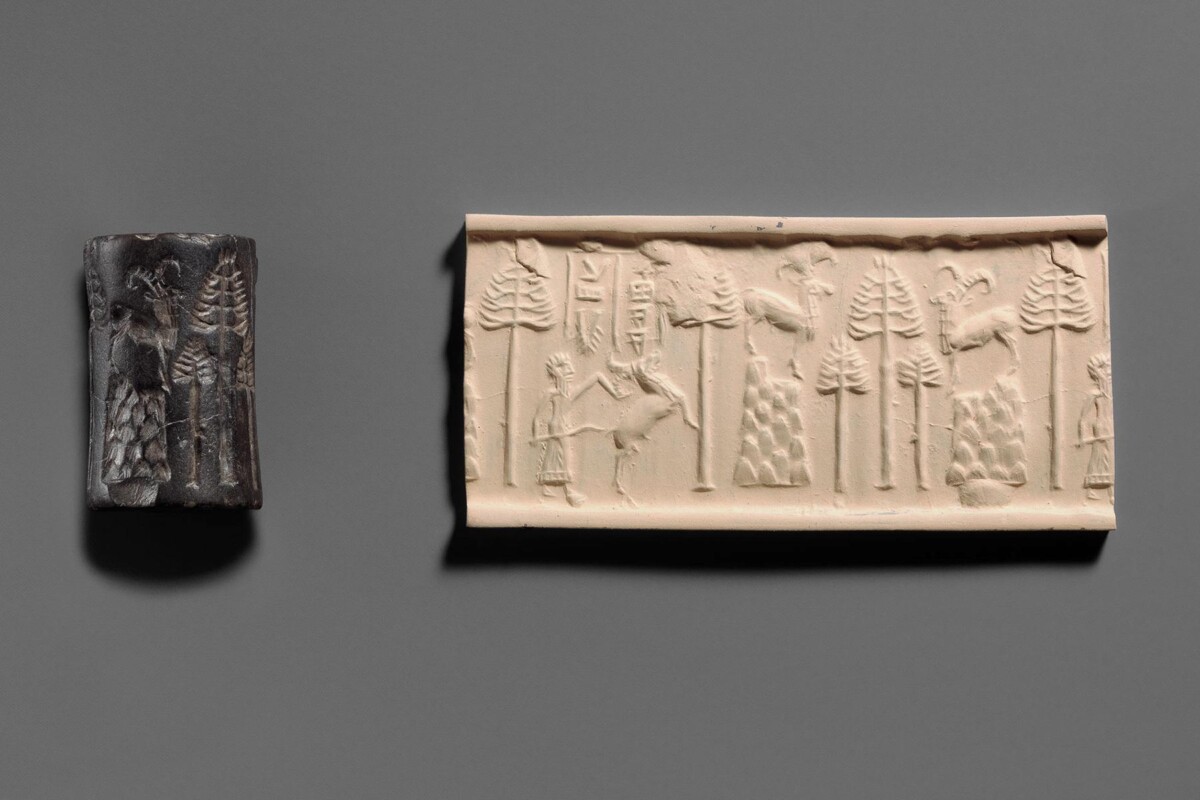 PHOTO:Photo Courtesy of the Metropolitan Museum of Art

WHERE: The Metropolitan Museum of Art, Upper East Side, Manhattan

The crowds at The Met may flock to the colossal Temple of Dendur or the towering Sphinx of Hatshepsut, but this thumb-sized Cylinder Seal also holds fascinating mysteries. The smallest object in the museum’s catalog, the stone object dates back to Mesopotamia 4,000 years ago.

Like an ancient version of a notary public, cylinder seals were pressed into clay and used as stamps to authenticate documents. They were also worn as amulets for their supposed protective properties. This one, the museum’s finest example, depicts a hunting scene and belonged to a high-ranking cupbearer (named Balu-ili) for the royal family.

Researchers still aren’t sure how the ancients managed to carve these incredibly-detailed miniature scenes into rounded stones with no magnification or power tools. So, next time you’re strolling through the Met’s Ancient Near East Wing, make sure to peep this miniature work of art with the big backstory. And with your leftover time, here are 15 other unexpected things at the museum you can go see.

For New York State residents and NY, NJ and CT students, the amount you pay for admission is up to you.

NYC is the birthplace of hip-hop culture and the world’s capital for high fashion. Increasingly, the lines are getting blurred between those two art forms, one of which is extremely accessible to the masses, and the other, well, not so much.

Fashion designer and artist Chris Pin bridges that divide. Pin creates limited edition figures inspired by fashion, art, and music. The Cambodian-American maker specializes in tiny handmade clothing, shoes, and accessories for collectible figures. He is best known for his micro leather sneakers that are exact replicas of the real thing, except one-sixth the size.

Pin opens his sneaker factory/art studio in Queens for bespoke tours upon request. He will take you through how each piece is crafted by hand using laser cutting technology.

See also  Real New Yorkers: How Do They Live?

Anyone can travel to New York and buy some Air Jordans, but how much cooler to visit an artist’s studio and come back with a teensy pair of collectible Nikes you will have for life? 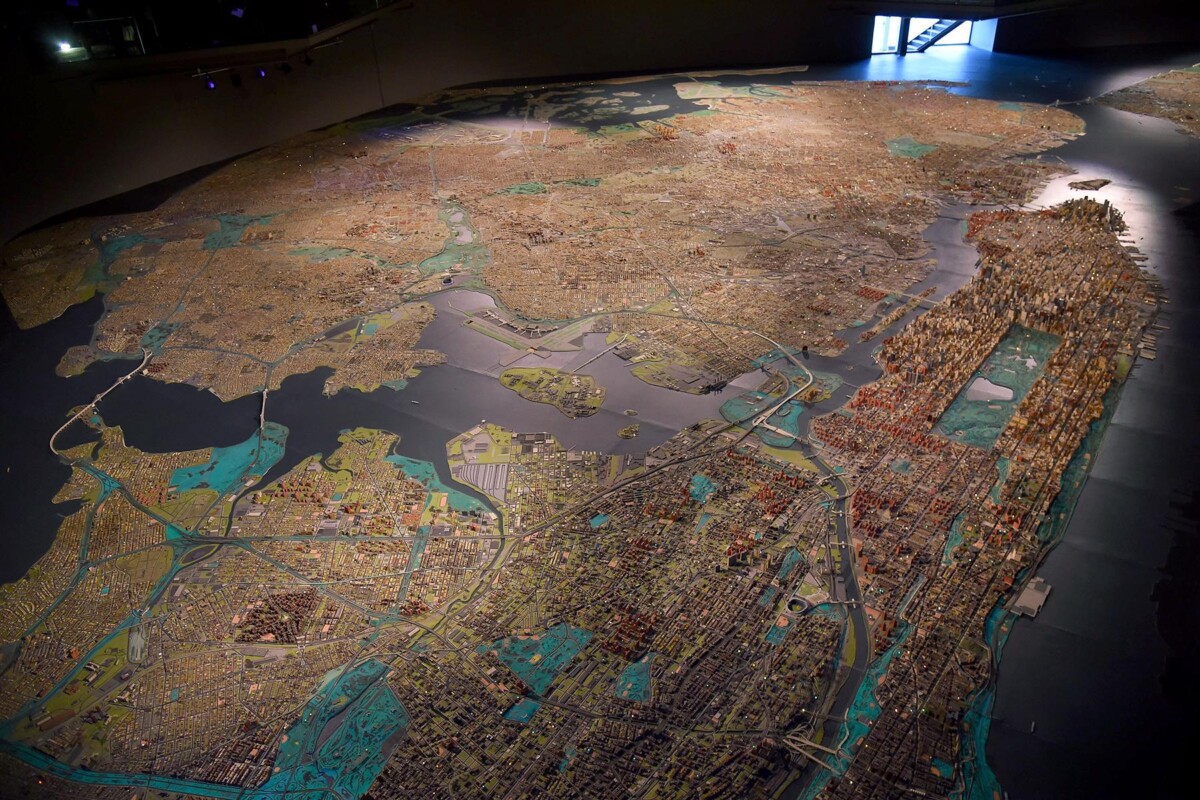 Panorama of the City

NYC is so vast you can’t see the whole thing even if you visit 100 times or stay for an entire year. So, the next best thing is this miniature model of NYC that is geographically correct down to the tiniest detail.

Conceived by urban mastermind Robert Moses for the 1964 World’s Fair, the Panorama is a miraculously scaled cityscape. It took a team of 100 people three years to build the model metropolis, which is built to a scale of 1:1200 where one inch equals 100 feet. The entire island of Manhattan measures 70 x 15 feet. The Empire State Building is a towering 15 inches tall while the Statue of Liberty measures not even 2 inches in height.

Insider Tip: Through the Adopt A Building program, you can “purchase” a tiny building. Your donation gets you a title deed for the property and the warm, fuzzy feeling of knowing you’re supporting the ongoing care of one of NYC’s man-made marvels.

Twig Terrariums in Brooklyn creates miniature worlds out of moss and tiny figurines. Peer into one of their glass jars, though, and you might find a thumbnail-size mobster beating a snitch to death with a baseball bat.

Yes, the shop makes bucolic scenes of yogis by waterfalls and sheep grazing on verdant hills but, in true New York spirit, they also do some pretty gritty stuff. A graphic crime investigation scene with a corpse or a hiker flashing her breasts.

“We try and represent life, death and everything in between, said Katy Maslow, one of the owners of Twig. “It’s hilarious to wander into this cute whimsical store and all of a sudden you’re looking at people burying a body. The morbid and the grotesque are not left out when it comes to beautiful things.”

The shop sells ready-made terrariums or you can place an order to have them customize your own mini-world according to your specs. And if you want to try your hand at building your own terrarium, they even offer classes.

Micromuseum in an Elevator Shaft

This establishment, housed in a freight elevator, specializes in the “overlooked, dismissed, or ignored,” is an NYC site that should definitely not be overlooked.

Mmuseumm is modern natural history museum that specializes in Object Journalism, which involves curating and exhibiting contemporary artifacts meant to explore humanity, current events, and the modern world…and the modern world is definitely a unique place in the eyes of whoever is doing the curating over there in that elevator shaft. Past exhibition subjects have included “Venezuela Counterfeits,” “Bread Clip Taxonomy,” and “World-Leader-Used Tissues.”

See also  Top 10 Places: Where to Go and What to See in Soho, Manhattan

Take note, the 20-square-foot micro-museum only fits three people at a time, which means you might rub butts against fellow museum-goers.

The Mmuseumm opens for its seventh season in Spring 2019. Get on its mailing list for the latest updates.

Size: The dimensions of your typical button

Founded in 1964, this Upper East Side landmark is the only shop in America devoted wholly to the sale of buttons. The tiny townhouse is stacked floor-to-ceiling with the miniature wonders.

In the beginning, Tender Buttons, named after a Gertrude Stein poem, functioned mainly as a bohemian hangout for artists like Jasper Johns, Ray Johnson, and Lenore Tawney. But while they were busy postulating about pop art, everyday people were focused on finding a replacement for lost buttons and a successful business was born. But calling it a business misses the point. It’s is more like a library. Or a museum. Or a church. It’s a place where one feels compelled to speak in hushed tones out of reverence for the tiny perfection of the buttons and the place that so tenderly houses them.

So, whether you’re missing a button or you just want to delight in a quiet place unlike any other in NYC, check out Tender Buttons. 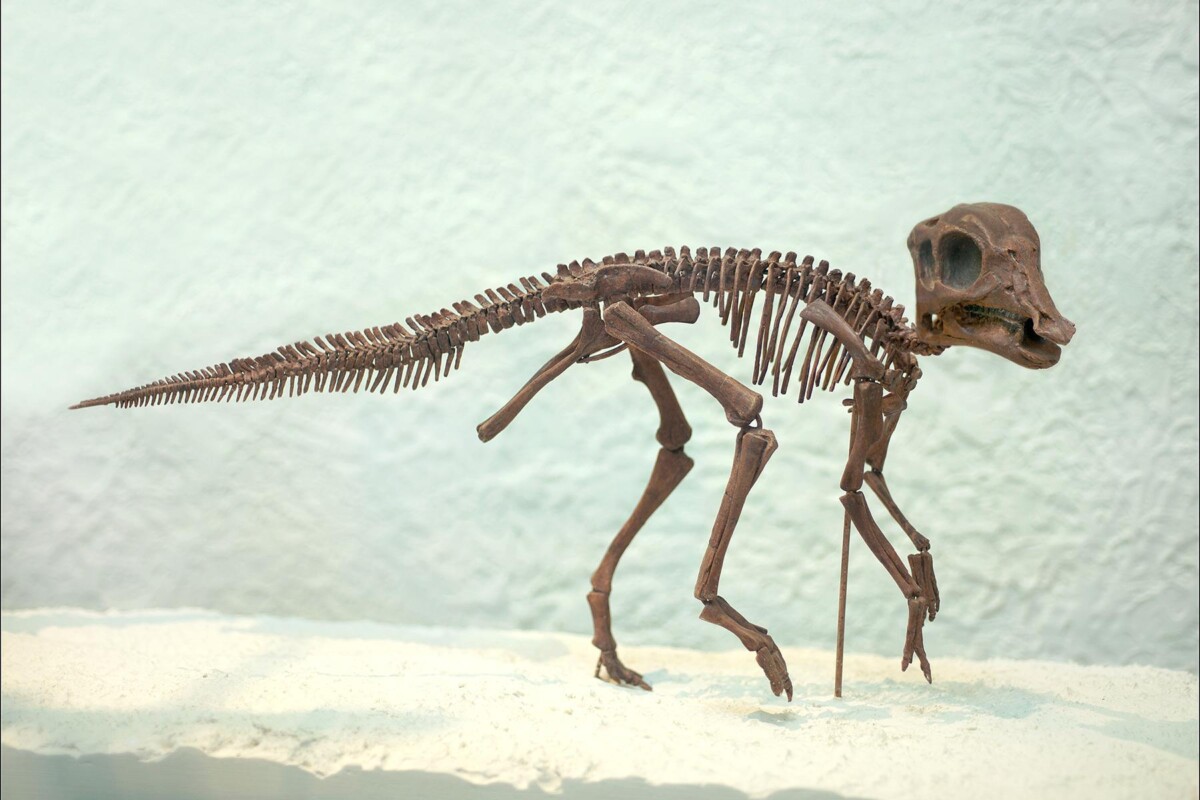 WHERE: American Museum of Natural History, Upper West Side, Manhattan

Anyone can ogle at the room-sized dinosaur skeletons at one of the world’s top natural history museums. Yet, some of the 5 million visitors passing through each year might be passing right by the Hypacrosaurus altispinus fossil, which is about the size of a dog.

The little guy was only a year old when he met his demise about seven million years ago, which, while unfortunately, led to his immortalization as the tiniest dinosaur at the giant museum.

True to form, the tiniest plot of land in NYC is actually a giant, um, middle finger to the city. The Hess Triangle is a mosaic set in a sidewalk outside a bodega that is the result of a land dispute between the city and the estate of David Hess that occurred a century ago.

In 1910, the city demolished Hess’s building under eminent domain to expand the IRT subway. Hess’s heirs discovered the city missed a tiny isosceles triangle of land, so what did they do? They refused to donate it to the city and instead dedicated a defiant mosaic to ensure Hess, though six feet under, got his recognition.

Speaking of small, one of NYC’s most legendary jazz clubs, Smalls, is right across the street. The club, located down a narrow stairway in a basement, may be cramped, but it’s the real deal. 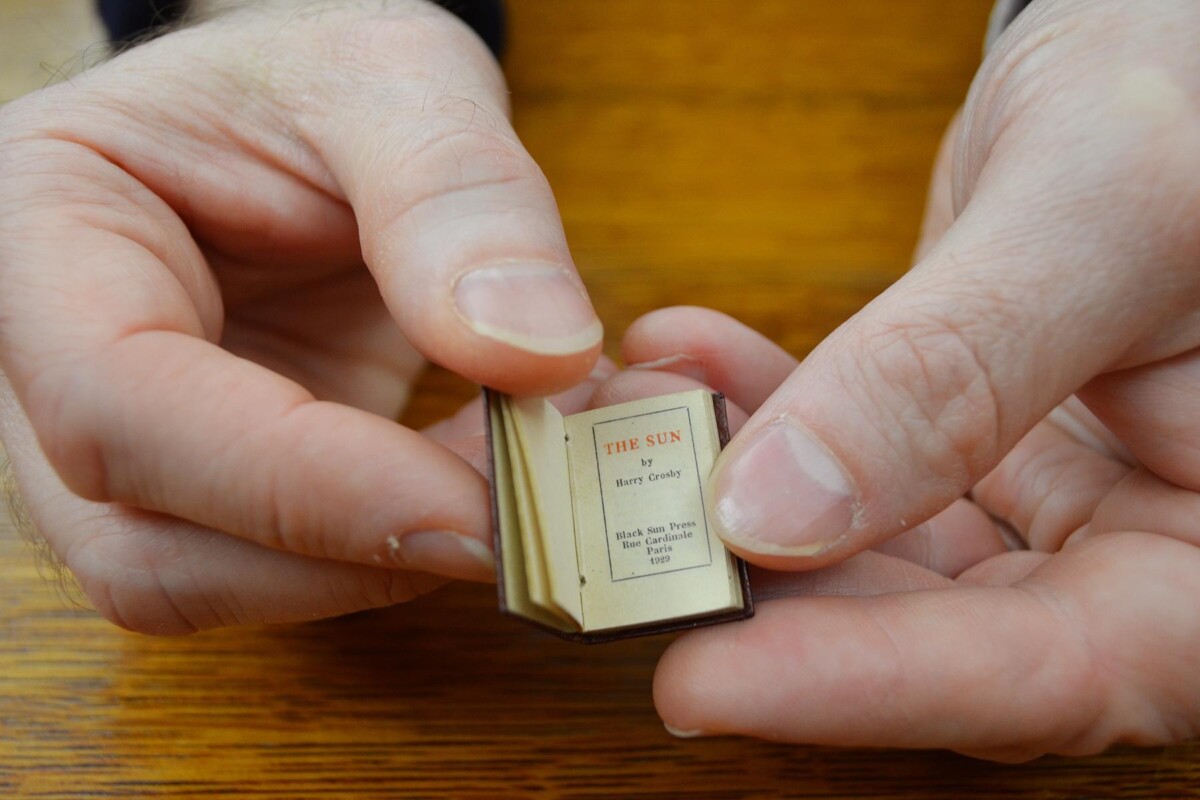 The collection includes the Gutenberg Bible, the only surviving copy of Columbus’s 1493 letter announcing his encounter with the New World, and the original handwritten manuscript of Oscar Wilde’s The Importance of Being Earnest.

It’s also home to The Sun by Harry Crosby aka the world’s tiniest library book! Published in 1929, you need a magnifying glass to read its 3-point type. Visitors who go beyond the obvious selfie with the big stone lions outside the library’s entrance will find this to be a real treat.

Even though the quarter-sized book couldn’t be cuter, the backstory of how it came to be written is actually pretty twisted and macabre.

If your dog has a prom, quinceañera, or red carpet event coming up, Miguel Rodriguez is your man. The designer makes mini-formalwear for pets that’s over-the-top and completely fabulous.

“I’m doing things differently than other designers,” Rodriguez says. We’re Latinos, so I started dressing doggies in Mexican fútbol shirts, Puebla shirts, Frida Kahlo-inspired outfits. My style is based in my roots.”

Dalila’s Petwear is smack dab in the middle of America’s most diverse neighborhood, Jackson Heights. So, if you’re hungry after shopping for your dog’s evening gown, take in some Tibetan dumpling momos, Colombian sancocho stew, or Bengali street food from a truck, which is usually parked somewhere near the aptly named Diversity Plaza.

John Casey, an Irishman with a thick brogue who’s been making rubber stamps since the Carter administration, thinks the problem with the world today is that people don’t get their hands dirty anymore. His remedy? Stamps.

“Stamps are different to images on a screen. They’re tactile,” Casey explains. “You can sit in front of the computer all day but you never get your fingers wet. Your hands don’t get covered in ink. With stamps, you can make a mess and get it all over the place.”

People from all walks of life meander into his cramped East Village store to peruse the little eccentric stamps. Using red rubber, a Vulcanizer and wooden blocks, Casey’s is one of the only places left that makes novelty stamps the old-fashioned way.

“What do people do with these stamps?” Casey asks. “How the hell do I know? That’s exactly the point. People come in and say, ‘What can I do with this?’ It doesn’t matter. Buy it because you like it. You’ll figure it out later.