New York – the city that never sleeps. There is something magical about the city and it differs significantly from other cities in the USA.

It has its very own atmosphere and once you get there, you can’t stop being amazed. Numerous New York sights make your visit a unique experience that you won’t forget in a hurry. Whether a stroll through the largest park in the city, the breathtaking view from the Top of the Rocks over New York, or a stroll through the hip districts of Little Italy, SoHo, and Greenwich Village.

An oasis in the middle of the big city, the green lungs and recreational area of New Yorkers – that is Central Park in New York. It is the largest park in New York and extends from 5th to 8th Avenue, as well as from 59th to 110th Street in the famous Manhattan district.

New Yorkers themselves like to come here to switch off from everyday life because once you are in the park, you don’t notice much of the hectic city life around it. You can only see the skyscrapers soaring into the sky. Central Park has a lot to offer in terms of attractions and entertainment. Whether in a paddleboat across the large lake, jogging on the 10 km long jogging track around the park, listening to the street musicians, or skating on the ice rink in winter, there is really a lot to discover. The best thing to do is to borrow one of the bikes and explore the large park.

One of the most famous places and an absolute must-see in New York is Times Square in Midtown West, Manhattan. Here, at the intersection of Broadway and 7th Avenue, the city pulsates. Bright colors, oversized advertisements, life-size Disney characters, and many people around you, all that and much more make it one of the most important New York attractions. You can get a first overview of the red staircase in the middle of the square that cannot be overlooked.

Not only tourists like to stay here, but also locals themselves and enjoy the hustle and bustle. Times Square has a special atmosphere, especially in the evening hours when everything is brightly lit. You will find the box office directly under the stairs, because around Times Square in the Theater District with various world-famous Broadway shows in more than 40 historic theaters.

Sometimes you can even get remaining tickets at short notice for a lower price. While strolling through Times Square you will come across well-known Disney characters with whom you can take a picture.

The absolute highlight, however, is the world-famous Naked Cowboy, who plays the guitar in cowboy boots and underpants.

In addition to numerous theaters, you will also find some flagship stores in Times Square, such as the Disney Store or the oversized M&M Store. But you can also shop for clothes here almost around the clock because the shops are usually open until midnight. Or you go to one of the museums, such as Ripley’s Believe it or Not! or Madame Tussauds.

See also  Most Famous Artists from New York and Their Masterpieces

3. Top of the Rocks & Rockefeller Center 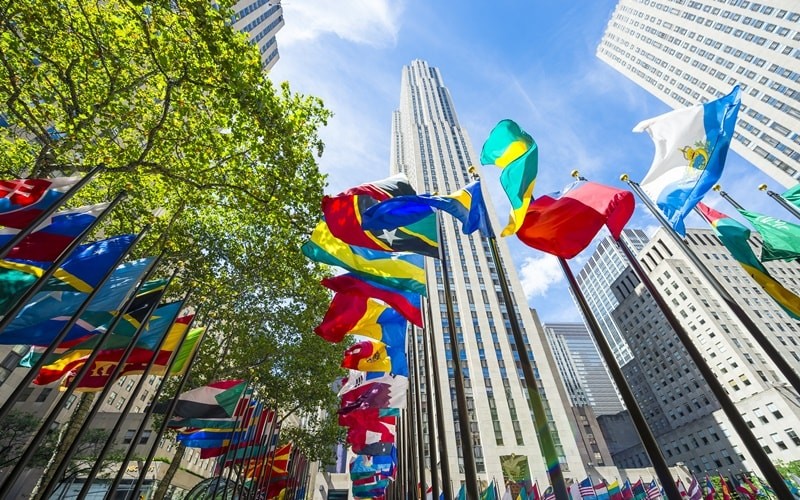 You get an absolutely breathtaking view over New York and one of the most famous New York sights, the Empire State Building, from the Top of the Rocks at Rockefeller Center in Manhattan. The Rockefeller Center actually describes a whole complex of buildings that extends over three blocks and includes more than 20 buildings.

The best known is the Comcast Building, which is often referred to as the Rockefeller Center or because of the address as the 30Rock. In addition to TV channels such as NBC and MSNBC and studios for the Tonight Show and Saturday Night Live programs, the famous viewing platform is also located here, which is why the building has become one of the most famous New York attractions.

The 259-meter high building has 70 floors, making it the tallest in the Rockefeller complex. Also known here is the Lower Plaza of Rockefeller Plaza, a square directly in front of the Rockefeller Center. Concerts take place here in summer, an ice rink, and above all the tallest Christmas tree in town in winter.

The absolute highlight of each year is the Christmas tree Lightning when the mayor solemnly lights the almost 30,000 lights on the largest tree in the USA. At Christmas time, the tree with the ice rink in front of it is one of the most popular photo opportunities.

The Brooklyn Bridge is not only the backdrop for numerous well-known films and series, such as “Sex and the City”, but also one of the oldest suspension bridges in the USA and one of the landmarks of New York.

A total of six lanes lead over the bridge plus one level above for pedestrians and cyclists. It connects the districts of Manhattan and Brooklyn over the East River and, as a bridge of longing, symbolized the way to the heart of Manhattan and thus to a better life. Meanwhile, Brooklyn has also become a popular district, especially among artists, and is one of the New York attractions and is visited by numerous tourists.

Despite the fact that the Brooklyn Bridge has been around since 1883, it is still an absolute highlight and is therefore one of the top New York attractions. Not least because of this, you are sure to meet many other tourists and it can get a bit tight. However, if you are on the bridge in the early morning, you will have it almost to yourself and you will also be able to enjoy an incredibly beautiful view.

See also  Books and Films: What to Watch and Read Before a Trip to New York City

A park on an elevated railway line. Sounds weird?

But you will find one of the most popular New York attractions in Manhattan. It was built in 2009 and is now a popular retreat for many New Yorkers and tourists. At that time, the tracks were used for freight traffic between Gansevoort Street and 34th Street. Today the two-kilometer route invites you to take a walk through the high-rise jungle in southern Manhattan, the Meatpacking District. To walk the entire High Line once you need about an hour. In between, you can sit on the benches and just enjoy the time in the hectic city.

Especially when art installations are being shown, you should take enough time. There are several entrances along the High Line that you can use depending on where you are coming from.

Who doesn’t know the Statue of Liberty in New York? It is THE landmark of the city and one of the most famous New York sights at all. On Liberty Island, south of Manhattan, it was once the first thing emigrants from New York saw when they entered port. Right next to it you will find Ellis Island, where the emigrants were registered after their arrival.

In order to simulate the procedure of such registration, a museum was built on Ellis Island, which you can still visit today. There are several ways to visit the Statue of Liberty.

On the one hand, you can do a Liberty Tour, where you are picked up from the port in Manhattan and brought to the island, or you can opt for the free variant with the Staten Island Ferry, where you only sail past the statue. If you want to go straight to Liberty Island, you should plan at least half a day, if not more.

And you should also book the tickets online in a good time. For some parts, such as the crown of the statue, there are only limited tickets.

From the 86th floor, you have a magnificent view of the city, but there is a lot more to discover in the Empire State Building.

On the 80th floor, for example, you can visit the “Dare to Dream” exhibition, which tells about the building.

Because the building, which is over 380 meters high, was built in just 13 months. A real masterpiece.

Do you want to visit two of the hippest and nicest neighborhoods in New York on your trip? Then you should stop by Greenwich Village and SoHo, Manhattan.

You won’t find any sights here, but there are plenty of small cafes, restaurants, and real New York life. Greenwich Village is best known for its student life, as the famous New York University is located here.

Washington Square Park, the heart of the neighborhood, is where most of the buildings are, as well as the famous NYU Archway.

The many cafes, restaurants, theaters, and jazz clubs in the streets create a special atmosphere.

SoHo is also more about experiencing the feeling.

If you don’t want to go out in style, a stroll through the trendy district is still worthwhile, simply to have experienced the atmosphere for once.

Along with Central Park, Bryant Park is one of the most beautiful parks in New York and should therefore not be missing from the list of New York attractions. It’s not so special because it’s unbelievably big, but rather because it’s quite clear and various events take place throughout the year.

In summer concerts, poetry slams, or film screenings take place here, you can play ping-pong or chess or take part in various workshops. In between, you can strengthen yourself in the restaurants and cafés.

In winter you can ice skate in the Winter Village or stroll through New York’s most beautiful Christmas market. Another highlight is the view of the many skyscrapers around it.

And you can also see the Empire State Building with its colorful tip from here.

Macy’s on Herald Square in Manhattan is not only an incredibly large mall that goes over a whole block and it is a real experience. At 2,500,000 square feet, it is one of the largest retail stores in the United States.

Numerous brands can be found on 10 floors – fashion for women, men and children, accessories, beauty products, housewares, bridal wear, furniture, and of course a food court. The highlight, however, is the various festivities and events that made Macy’s famous.

The Christmas decorations are really impressive. Then the shop windows glitter and sparkle, the 8th floor is converted into a winter wonderland and Santa Claus and his elves accept the children’s Christmas wishes. It’s almost like in a film and you can’t stop being amazed.

At the end of March to the beginning of April, the shopping center is transformed into a sea of flowers and you can watch the unique flower show.