NYCity.media » Articles » The Most Beautiful Bridges in New York City

The Most Beautiful Bridges in New York City

New York has five main boroughs – the Bronx, Manhattan, Brooklyn, Queens, and Staten Island. Only one area – the Bronx – is located on the mainland. All other areas are on the islands – Manhattan and Staten Island are on separate islands, Queens and Brooklyn are located on the same island. Separate areas of the city, separated by water, are connected by a total of about 60 bridges, and there are more than 2000 bridges in this city. In this article, we reviewed the most beautiful bridges in New York.

Verrazzano-Narrows is a two-story giant that connects several city districts – Staten Island and Brooklyn. It can be considered the longest bridges in New York and every tourist or resident must see this place. This bridge was named after Giovanni da Verrazzano, who was the first explorer of the Atlantic coast. 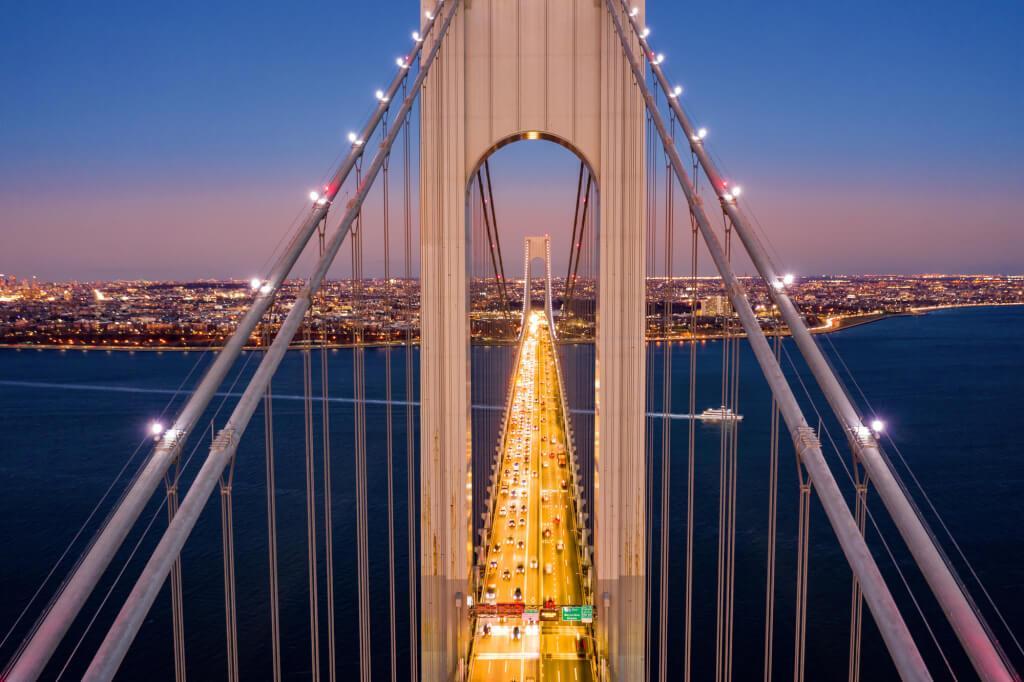 The most beautiful bridges in New York to visit: Verrazzano-Narrows

The bridge is intended only for road transport, pedestrian traffic on it is prohibited. However, once a year, an exception is made to this rule. During the traditional New York marathon, one of the bridge levels is transferred to the full use of the participants in the running marathon.

The Brooklyn Bridge is not just a connecting highway between Brooklyn and Manhattan, it is one of the main attractions of New York, one might say, a visiting card of the city. This is a record-breaking bridge, a structure with its own, in some places tragic, but exciting history.

Top most beautiful bridges in New York: The Brooklyn Bridge

Unique in its design, this Gothic-style bridge is also considered a real architectural masterpiece, to emphasize this fact, a special illumination was installed, which favorably emphasizes the main aesthetic features of the structure. Today, the Brooklyn Bridge is on the list of the main National Landmarks of the United States, is the most popular tourist attraction, and one of the main characters in dozens of movies.

It is a historic bridge linking Long Island with Manhattan Island. It passes over Roosevelt Island and the East River.

The bridge is 2,200 meters long and has two levels. We lived in Queens and took the subway across this bridge to downtown New York every day. 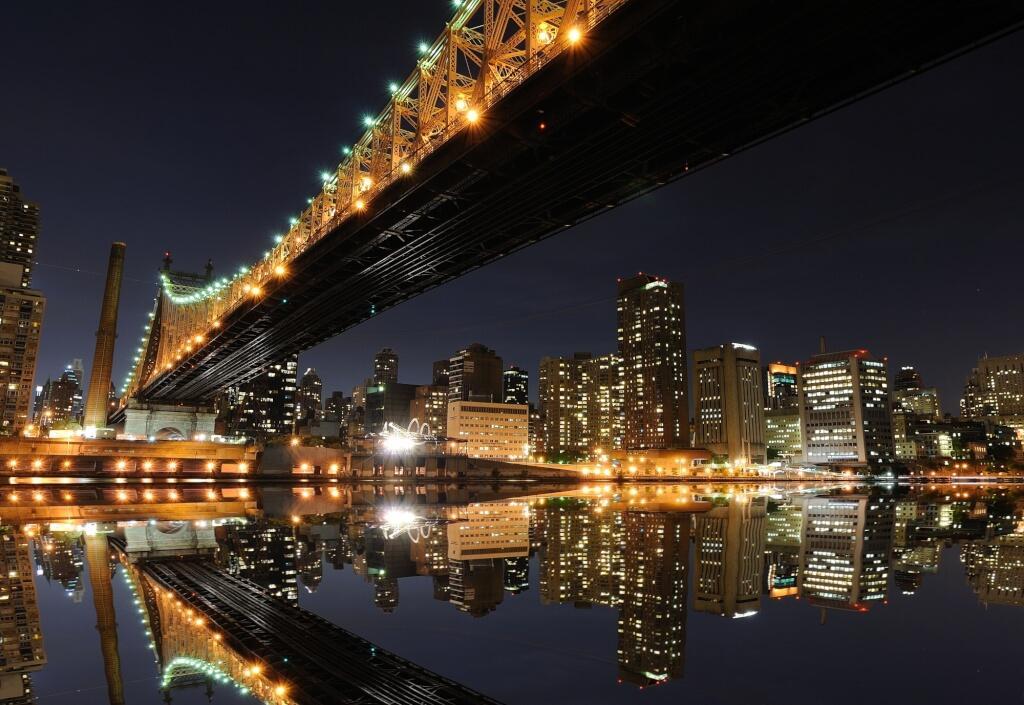 Next to the bridge, there is a funicular to the Roosevelt Islands in Manhattan. Be sure to ride it. This is an unforgettable experience. This is practically the only free bridge from Queens to Manhattan, but that’s why it almost always has different levels of traffic jams.

See also  Staten Island: One of the Five Boroughs of New York

In addition, although under the last mayor, the bridge was renamed in honor of ex-mayor Edward Koch, the people continue to call it by the old name.

The bridge is very beautifully illuminated at night. It offers a delightful view of New York at night.

A bridge over the Hudson, which takes you from Manhattan to the continent. It was built in the early 30s of the last century and became the largest suspension bridge in the world until it was bypassed by the Golden Gate Bridge in San Francisco. 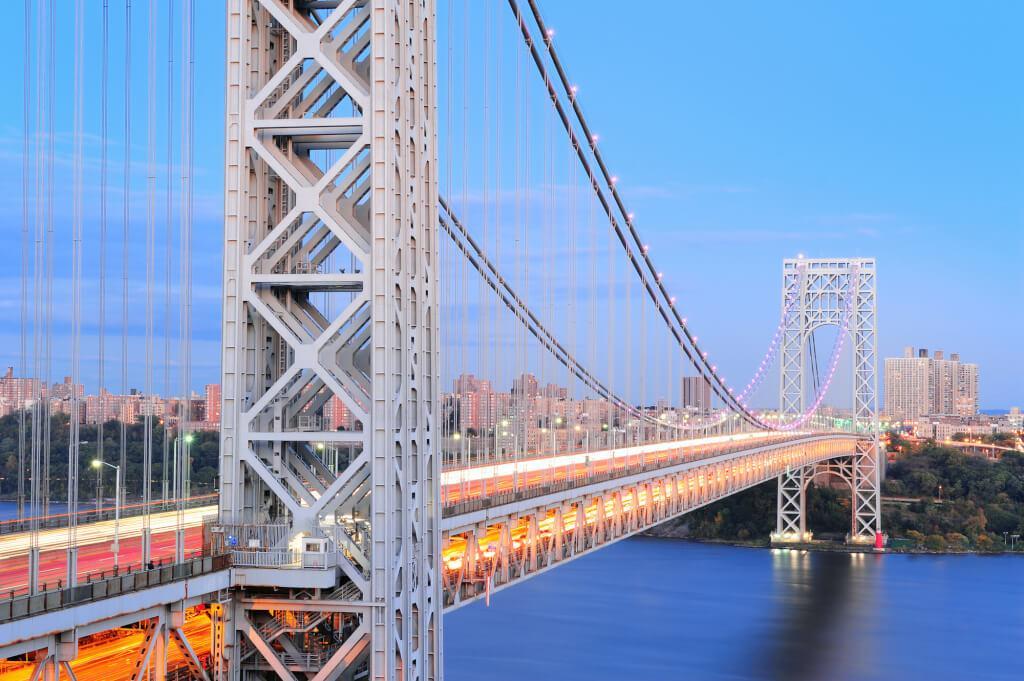 There is a sign on the bridge indicating where the territory of New York State ends and the territory of New Jersey begins, or vice versa, depending on which side you are moving from. When you move across the bridge in a car, you don’t imagine the scale of this object, but when you look at it from the side, you understand how much this whole structure is amazing. The bridge can be crossed on foot, by bicycle (there are quite a few of them), by car, etc.

The bridge is owned by the Port Authority of New York and New Jersey, a two-state corporation that operates much of the region’s infrastructure: airports, bus terminals, cargo ports, bridges, tunnels, railways, and even the World Trade Center – all owned by it. The money collected for the passage across the George Washington Bridge goes into its budget.

Manhattan Bridge is a suspension bridge built-in 1909. It crosses the East River and connects two districts of New York – Manhattan and Brooklyn. The bridge is a two-tiered bridge with a six-lane carriageway on its upper level. On aerial platforms, signaling devices are installed to indicate which lanes are currently working. The lower tier has four metro lines, on either side of which there are pedestrian walkways and bike paths. 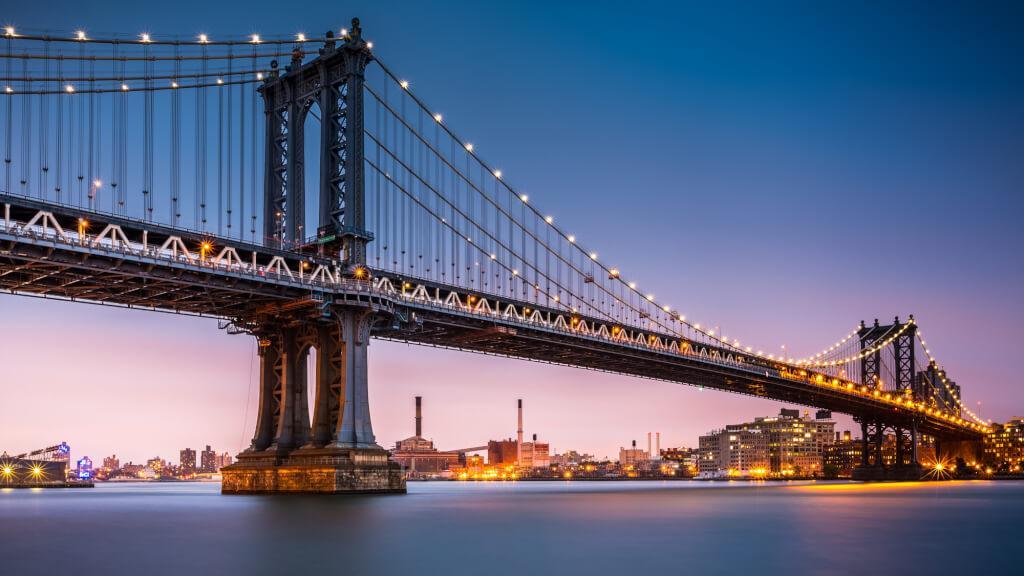 The total length of the bridge is 2090 meters, the width is 38 meters, the span height is about 42 meters, which ensures the smooth passage of ships. The daily bridge traffic is 35 thousand cars. The Manhattan Bridge offers a beautiful view of New York, making it one of the favorite places for tourists and visitors to the city.

If you walk on the right side of the street in the direction from Manhattan to Brooklyn, you will get a wonderful view. From here, you can take a lot of beautiful photos of the city and the Brooklyn Bridge. And shots with skyscrapers and a panorama of the city are worth enduring the noise of the subway behind. The pedestrian path is protected on both sides by a mesh that does not interfere with admiring the city.

Williamsburg Bridge crosses the East River in New York and connects the two districts – Brooklyn and Manhattan. This suspension bridge was built in 1903, its length is 2227 meters, width – 36 meters, height – about 41 meters, which ensures the smooth passage of ships under it. 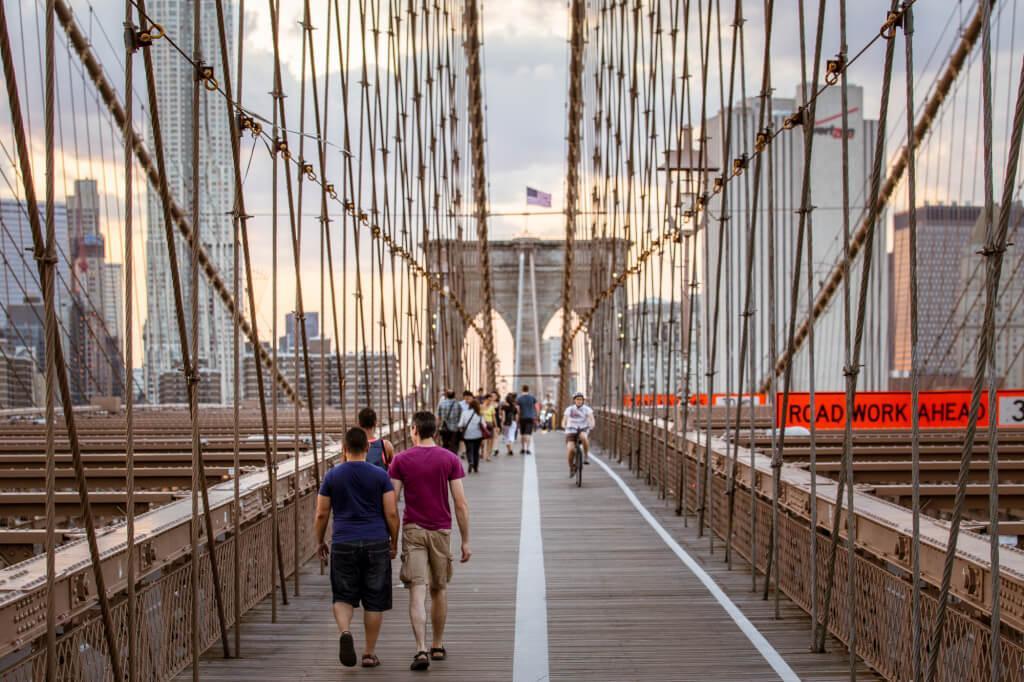 Currently, the bridge is a complex metal structure, consisting of eight lanes of road, two railway lines for subway trains, a cycle path, and two pedestrian sidewalks. Its daily traffic is about forty thousand cars.

Due to its location, Williamsburg Bridge attracts many tourists, as it offers a bird’s eye view of New York.

The Triborough Bridge can be called one of the most important links in the chain of transport links in New York. On average, more than 200 thousand vehicles rush across the bridge per day. But it’s not so easy to get from Brooklyn to the streets of Manhattan bypassing the famous bridge. Authorities ordered a cash toll on passenger vehicles of $ 5.00 in any direction to cross the bridge, and a rider would pay $ 1.81 for the opportunity to ride with the breeze. The collected money is used to maintain the bridge and the tunnel in good condition and repair. In addition, there are warning signs on the sidewalks saying that bicycles must be “carried” to improve traffic safety, a sign that, of course, is ignored by cyclists, and the authorities are going to revise the rules for their movement. 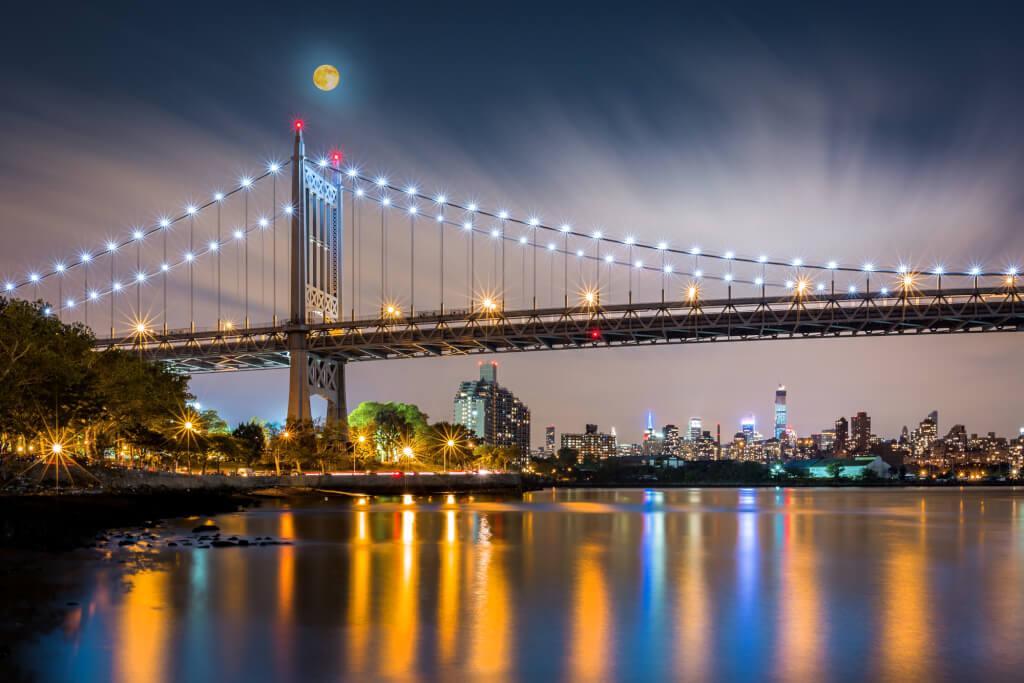 In 2008, the Triborough Bridge was inaugurated as the Robert F. Kennedy Bridge. Renowned 20th century US politician and statesman, Robert Kennedy, was elected Senator from New York State and was the US Attorney General. Five years after the tragic assassination of his older brother, US President John F. Kennedy, he was shot to death during his presidential campaign in 1968. Several generations of the famous Kennedy family and many representatives of the US political elite gathered at the ceremony to mark the renaming of the famous bridge in the nearby Queen Park.

The Kosciuszko Bridge runs across Newtown Bay in New York and connects Greenpoint, Brooklyn, with Muspet, Queens. The new bridge is a cable-stayed bridge that was opened in April 2017. It has three lanes in each direction. 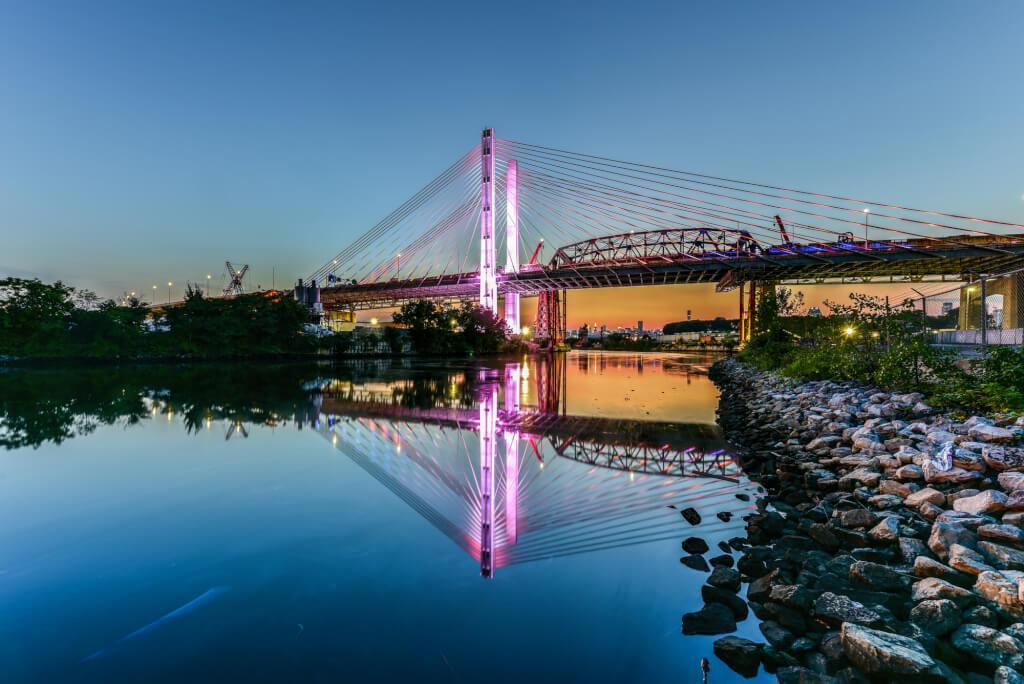 The man after whom the bridge in New York is named was a rather interesting historical figure. Tadeusz Kosciuszko is a national hero of the USA, Poland, Lithuania, and Belarus. In America, he was involved in the construction of defensive structures during the Revolutionary War and rose to the rank of brigadier general of the US Army.

The Henry Hudson Bridge in New York City connects the Bronx with northern Manhattan. The bridge is named after the famous explorer Henry Hudson, whose ship, called the Crescent Moon, moored these shores in 1609. The construction of a bridge on this site was proposed back in 1906, but then the public resisted, arguing that the construction would destroy part of the plantings in the local park. However, as traffic congestion grew, the need to build a new bridge became more and more obvious, as a result of which construction began. 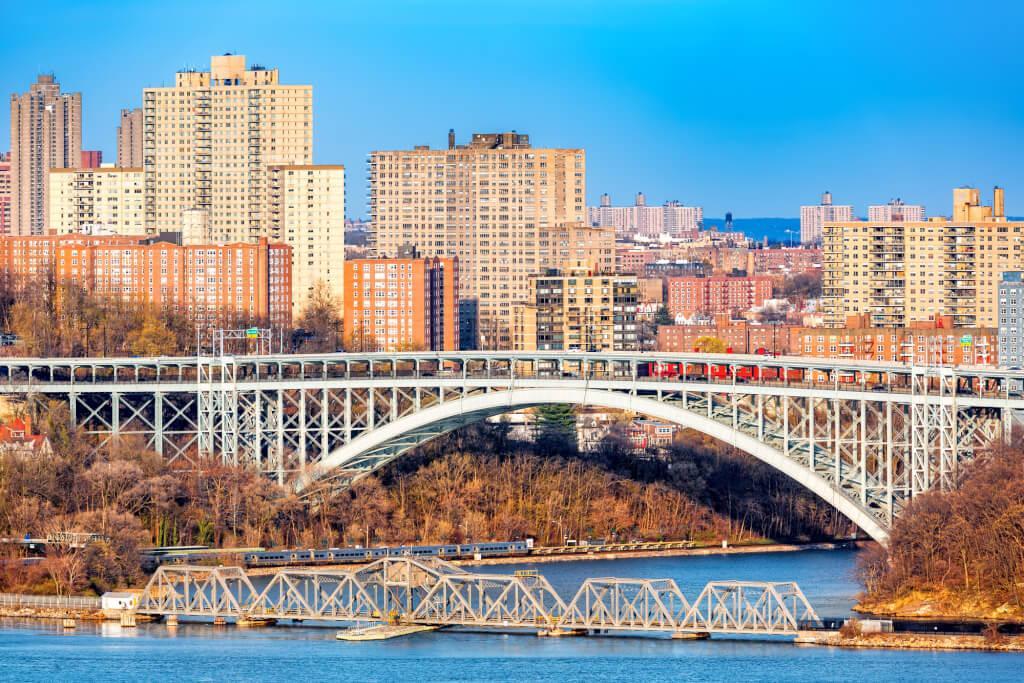 At the time of its opening in 1936, it was the longest arch bridge in the world at 673 meters, and the height above the river is 44 meters. This two-level bridge has seven lanes and a footpath. The upper level serves the movement in the north direction, and the lower one, as you might guess, is responsible for the south direction. Starting in 2010, a pilot program of automatic electronic fare collection was launched.

The Bronx-Whitestone Bridge is one of the suspension bridges in New York City that crosses the East River. The bridge connects the urban districts of Queens on Long Island and the Bronx of the mainland of the United States of America, the federal highway I-678 passes through the bridge. The bridge was designed by Osmar Ammann and opened on April 29, 1939, in a four-lane design. 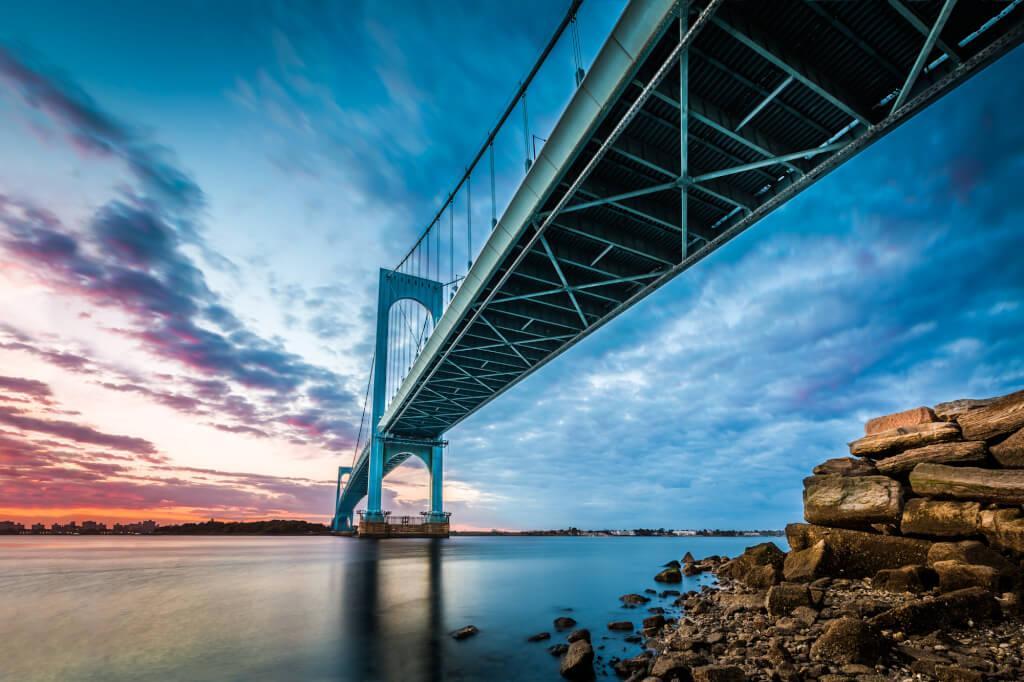 The bridge is wholly owned by the City of New York and managed by MTA Bridges and Tunnels, the bridge and tunnel management subsidiary of the Metropolitan Transportation Authority.

The Throgs Neck suspension bridge was opened in 1961. It crosses the East River and connects the two boroughs of New York, Queens, and the Bronx. The bridge is a giant steel structure made up of six car lanes, two pedestrian sidewalks, and bike paths. The total length of the bridge is 905 meters, width – 42 meters. The span height is 43 meters, which ensures the free passage of vessels under it. The daily traffic of the bridge is 110 thousand cars. 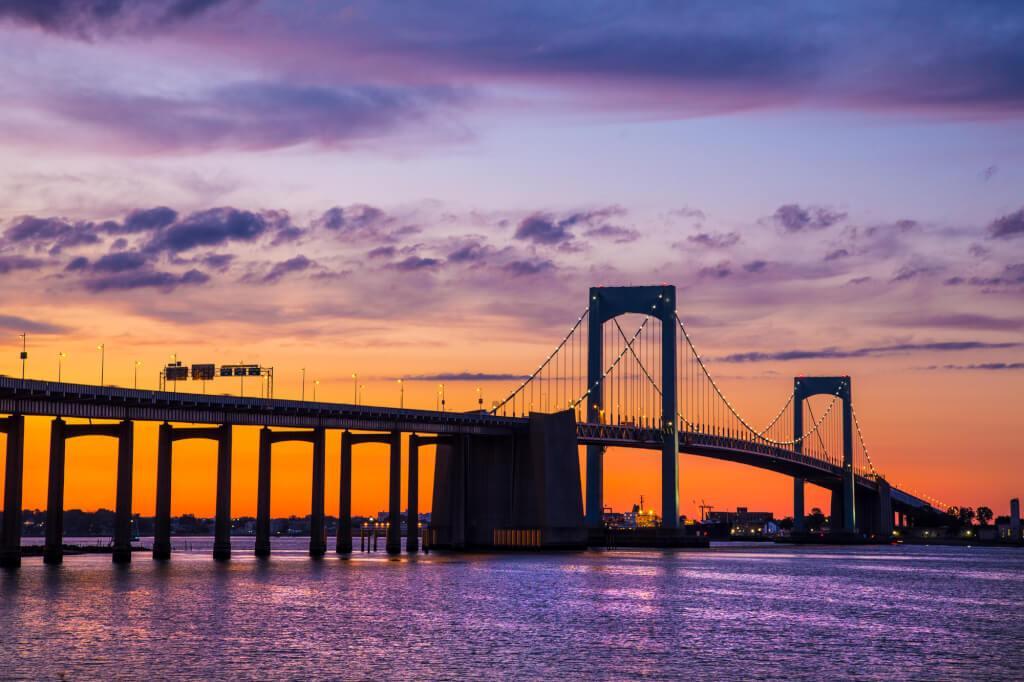 The bridge structure consists of several bends, thereby increasing the length of the path. The stairs at the ends of the bridge have ramps to facilitate the movement of disabled people. On the aerial platforms, there are signaling devices indicating which lanes are not currently operating. At night, traffic is limited and only two car lanes function. A picturesque panorama opens from the bridge that amazes passengers and pedestrians with its beauty.