Getting to know the new city is like the first steps. You eager to know and try everything that was unknown before, but you are confused and don’t know what to start with. New York – The Big Apple is a city of millions of people and bright lights, a city of American dreams and great events, a city of amazing places and outstanding sights.

It attracts millions of people who dream of plunging into the megalopolis, feeling the atmosphere of the city and at least becoming a part of it for a while. That’s why, when you first come to New York, you need to be prepared for its scale, and you should know which places you want to see and visit first of all, because there are places that you have not visited before, considering that you have not seen New York either. The main symbol of democracy, freedom and independence not only of New York, but of America as a whole, the Statue of Liberty, the full name of which is «Liberty Enlightening the World» is a 46-meter construction, the idea of creation and further realization of which belongs to the French that present it to America as a sign of friendship between the two nations.

Every year more than 4 million tourists come to the island, on which the statue rises, overcome 354 steps leading to the viewing point, which is located in the crown, and enjoy the marvelous view of New York. 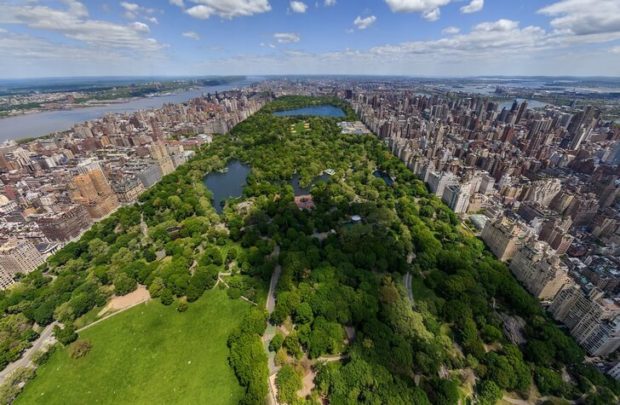 Central Park is like a breath of fresh air in the midst of high-rise buildings and everyday rush for New Yorkers. Designed by landscape designer F. Olmsted in the mid-19th century, today it is the most outstanding, picturesque and visited the park with the area of 3.41 km2.

The massive territory of the park gives everyone the opportunity to find their own place: an office clerk, who decides to dine open air, a married couple walking with children, a retired involved in sports, a noisy company gathered for a picnic, a tourist, visited the Park for the first time – everyone will find a piece of nature for himself.

Read Also: The Most Instagrammed Locations In New York City

The main part of the city, the square, where life is always full and people are always in a hurry. The square owes its name to the famous New York Times newspaper, which had its office there in the distant 1904. 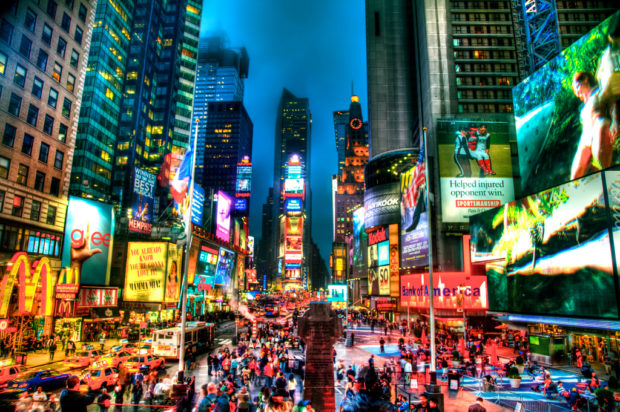 Times Square is the very heart of cultural life, where the famous cafes, hotels, cinemas and restaurants are situated. Skyscrapers, bright neon billboards, which are the must-have of the street, – all this is Times Square, with its special rhythm, cоlour and appeal.

It takes the place of the longest and one of the oldest streets crossing the whole of Manhattan and the Bronx. It was musicals, which brought fame to Broadway street, because such productions saw the world for the first time there. Also, it is famous not only for the theater, but also for the offices of American and international corporations and the Exchange House buildings. 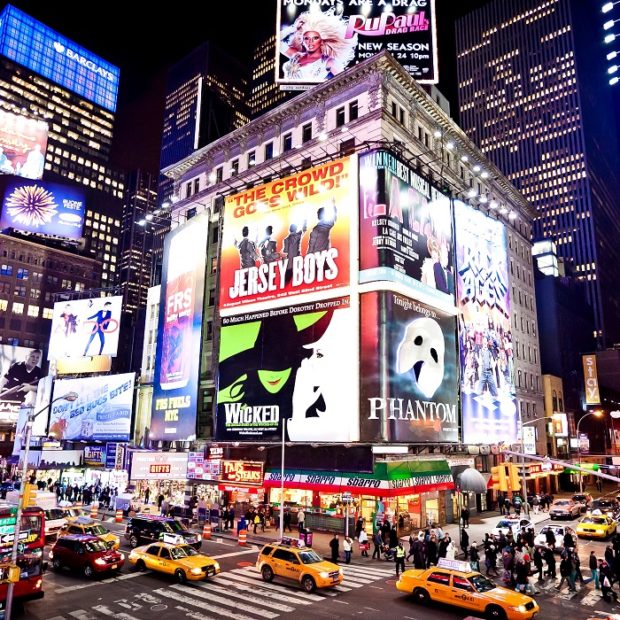 Moreover, Broadway can please you with a great range of cheap restaurants, cafes and hotels.

It is considered to be one of the main attractions of New York. The oldest bridge, which took 13 years to build (1870-1883), is more than 1,800 m in length, runs across the East River Strait and connects Manhattan with Brooklyn. 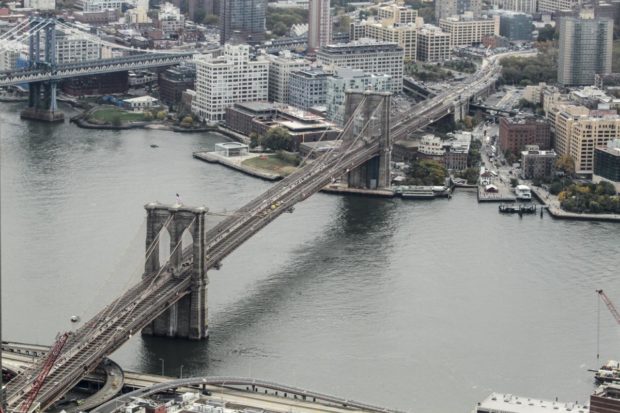 The Brooklyn Bridge combines greatness and mystery, fascinates and scares at the same time, but it is definitely worth seeing with your own eyes in order to experience the beautiful view of Manhattan and the Statue of Liberty.

It is famous not only for being one of the largest railway stations in the world containing 44 platforms, to which trains arrive from all over the USA, carrying more than 60 million people annually, but it is also considered to be the architectural pride of New York. 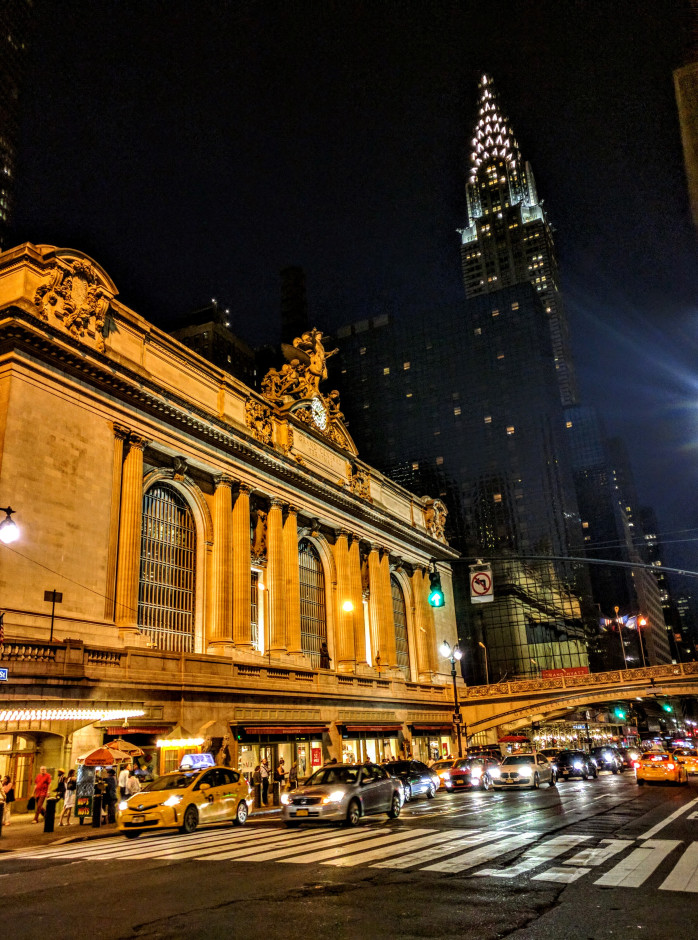 Very beautiful ceiling decorated with frescoes, which depicts the Universe and constellations, some of which are illuminated, and well-known electronic timetable, which takes care of passengers and is “hurrying” for one minute, are prominent elements of this spot.

Also your eye will be caught by opal clock, the cost of which experts estimated at $ 20 billion. A bright spot of business New York. The peninsula in the Southern part of Brooklyn, the population of which hardly exceeds 60 000 people, appeals tourists with its beaches, amusement parks and attractions, parades of mermaids and a roller coasters. All these facilities first appeared on Coney Island leading to extreme popularity of this destination.

The central street of Manhattan, in all its glory, reveals the luxurious life of the Americans. Dividing Manhattan into Western and Eastern parts, 5th Avenue is the “center” of the chicest boutiques of world-famous designers, numerous sights of New York; The Rockefeller Center, the Public Library, museums, private apartments and expensive hotels. 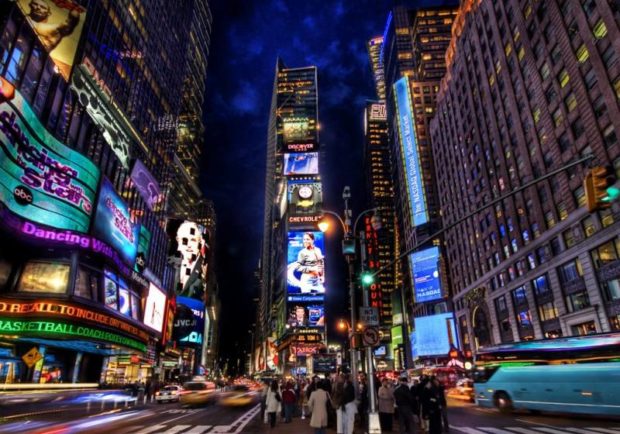 Having visited 5th Avenue, both shopping lovers and adorers of historical monuments will be satisfied.

The reflection of the financial New Yorks life and the street, which is well-known to us from Hollywood films. A street with 1 kilometer length, located in the south of Manhattan between Broadway and the East River coast, is always full of people who are busy with their business, always in a hurry and not keeping away from their phones. 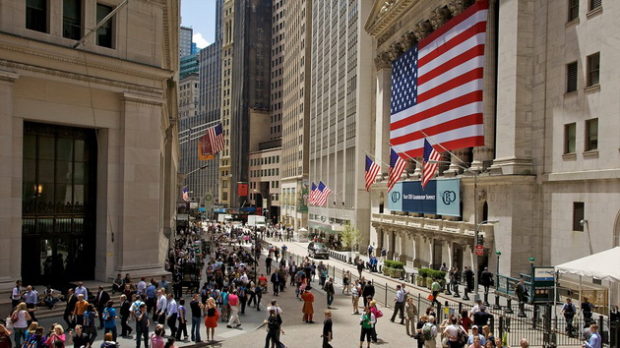 There are the well-known building of the New York Exchange House, the main office of financial institutions and the world’s largest banks situated on this street. The symbol of Wall Street is the Bronze Bull, a sculpture,the look of which embodies the most important qualities of a real businessman: strength and perseverance.

The place is unique. The square, located in the south of Brooklyn, where more than 75 thousand people officially live, the major part of which are Russian-speaking immigrants. Brighton Beach is famous for its special colour and atmosphere on the streets. 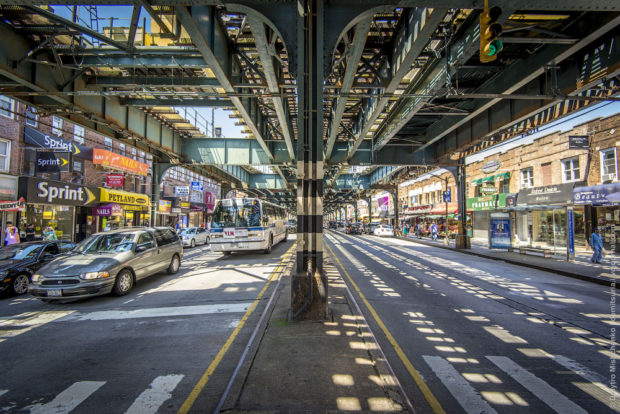 In summer, many Americans come here searching for a relaxing holiday on local beaches, for strolls along Borduok embankment, and a special mood created by seaside restaurants with authentic cuisine and live music. 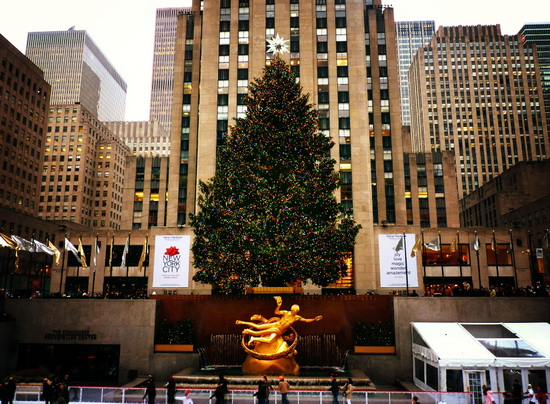 Rockefeller Center is a business center in the very heart of Manhattan. It is a complex of 19 buildings, designed not only for work but also for a rest. Built with the financial support of John D. Rockefeller, the Rockefeller Center is known for its ice rink, which is open for customers from October to April.

Also, there is an observation deck Top of the Rocks, which has a charming view on the Empire State Building and evening New York. The most famous Christmas tree, which is installed and decorated every year, is also a landmark of Rockefeller Center. Shopping centers, cafes and restaurants, theaters and cinemas are all waiting for you in the “city” in the center of Manhattan.

One of the most famous sights of New York, a popular monument of architecture, a skyscraper 443 meters in its height was built in 1931 and have been using the fame of the tallest building for a long time has more than 100 floors. Today, the Empire State Building attracts tourists with viewing areas, which are located on the 86th and 102nd floors, from where all of New York opens in all its glory and beauty.

Read Also: 45 free things to do in New York City

One of the most significant art museums in the world was founded in 1870 with the financial support of patrons. The world fame of the museum, acquired at the beginning of the 20th century, is due to the unique exhibits presented there. Nowadays, their number is approximately 2 billion works of art in all its variety: sculpture, painting, photography, musical instruments.

One day is definitely not enough for exploring the museum and its exhibits but it is worth spending there at least a couple of hours just to plunge into the atmosphere of creativity, luxury and genius. 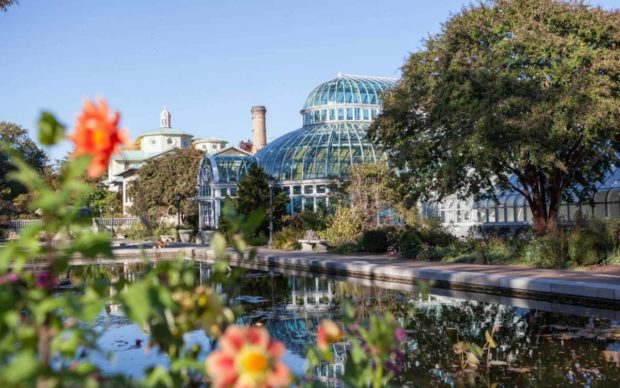 It is a natural miracle created by human hands, which gives a fresh breath of air among the skyscrapers of New York. The year of discovery is considered to be 1910, although the land for it had been determined 13 years before that. A huge territory with the square of 21 hectares provides with a huge variety (more than 12 thousand species) of plants from around the world.

The garden is divided into separate zones, “gardens”, so regardless to the season, you can come to the Brooklyn Botanical Garden and enjoy the unique plants such as the April magnolias, summer tulips and roses or even winter tropical exotic plants.

See also  Be My Baby: Ronnie Spector Left Us at the Age of 78

Built in 1930, the 77-floors, designed in the Art Deco style building had the status of the highest. Its name comes from the Chrysler automobile company, The top is decorated with massive round arches, which are crowned with a sharp spire. 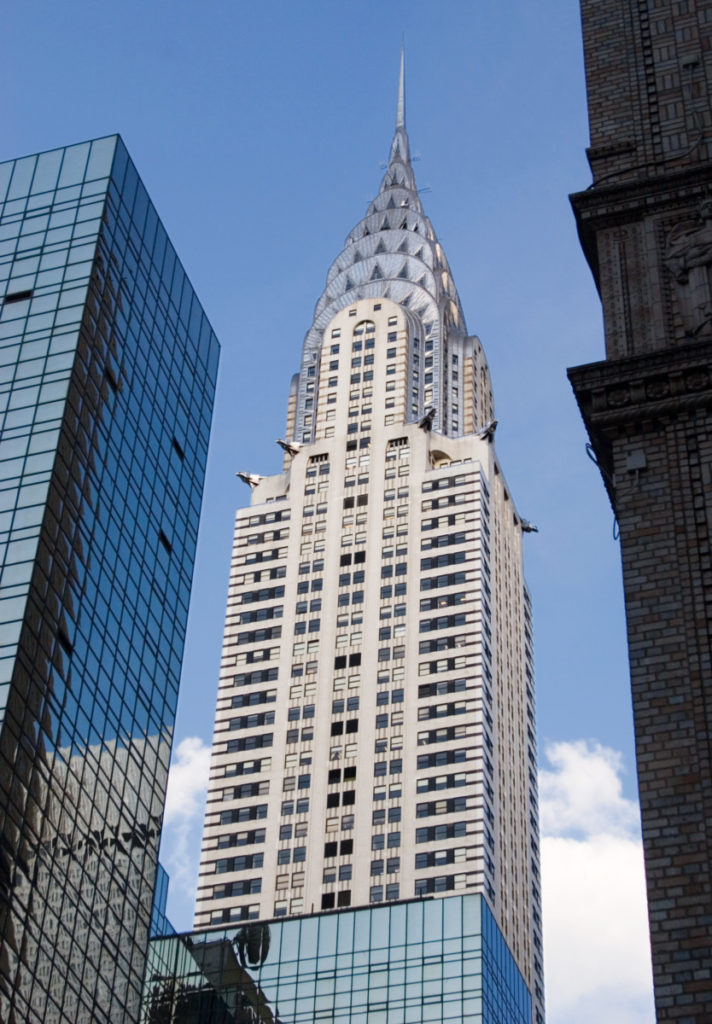 The construction is considered to be one of the most stylish skyscrapers in the world.

19-floor work of art with a touch of French charm, was built in 1907 by Henry Hardenberg. The most famous and luxurious hotel in New York, located on Fifth Avenue, windows of which are overlooking the Central Park is a prominent sight of the city. 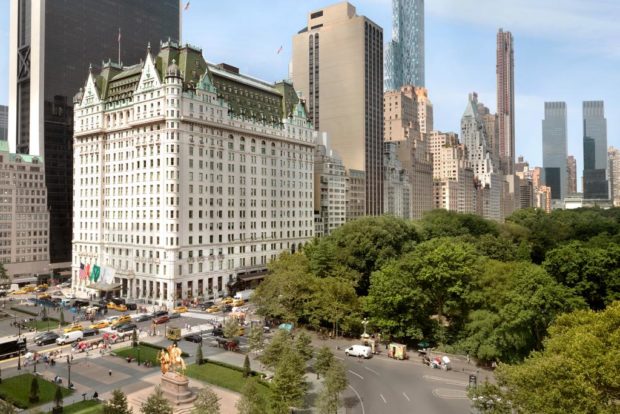 Even if you don’t plan to stay here drop into just for a drink at one of the hotel’s restaurants to have an opportunity to observe all the beauty and splendor of the building.

The place, causing sadness and admiration at the same time, is one of the most unique and tragic places in New York. The memorial, built in honor of the victims who died on September 11, 2001 from the terrorist attack on the twin towers, always attracts millions of visitors. The competition for the best project was announced in 2003, and 10 years later, in 2011 the memorial, located on the site of the skyscrapers, was completed. 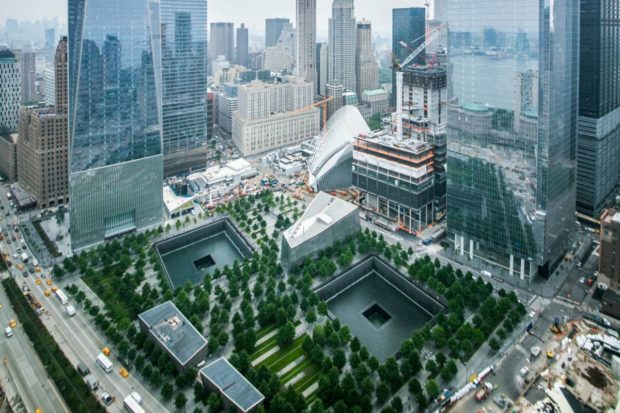 The waterfalls fall into two large swimming pools, and oak alleys are planted around it. There are also memorial plaques where all the names of the dead are listed.

This is the Catholic cathedral in the neo-Gothic style, the construction of which began in 1858 and lasted half a century with interruptions. The style of the building is completely different from the shops of Fifth Avenue. 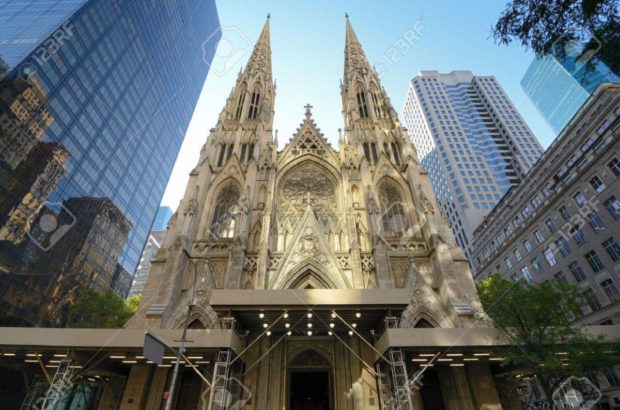 The cathedral is impressive in its scale: it occupies a whole block between the 50th and 51st streets. At the same time, it can house more than 2000 people. 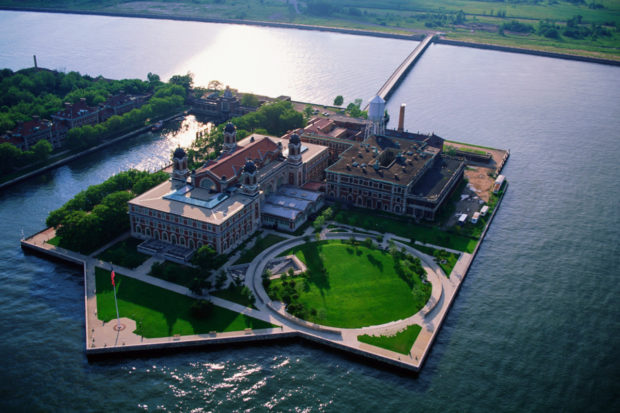 Located in the mainstream of the Hudson River, next to the Statue of Liberty, it is the first reception point for emigrants which arrived in New York from 1892 to 1954. There is a very interesting museum that tells about the history of immigration and immigrants contribution to the creation of America.

Cathedral of St. John the Divine 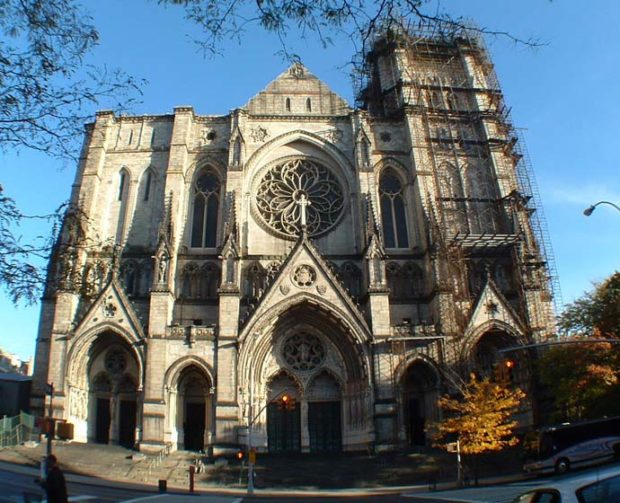 An interesting landmark, located in Manhattan, belongs to the Protestant church. Construction of the temple began in 1892 and it was opened in 1941 without finishing it.

Changes of architects at that period of time led to long-term construction and caused the mixing of different styles. (Neo-Gothic and Romanesque). The area of the cathedral is 11 thousand m2 and accommodates 5 thousand people.