Central Park is New York’s backyard. This lush 843-acre patch of nature in the middle of Manhattan is one of the city’s biggest attractions and greatest assets, enjoyed by tourists and locals year-round. Countless scenes from movies and TV shows have been filmed here over the years. 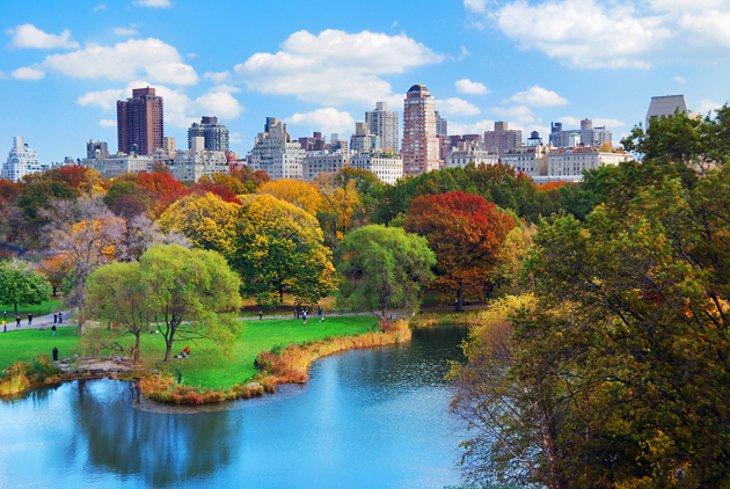 The park is home to scenic hills; meadows; playgrounds; skating rinks; ball fields; and many well-known attractions, including Strawberry Fields, Belvedere Castle, and the Central Park Zoo. Be warned; the park is huge. The best way to explore it is to stop by the visitor center and pick up a map of Central Park showing the various attractions and things to do, and then plan out a walking route or take a tour. 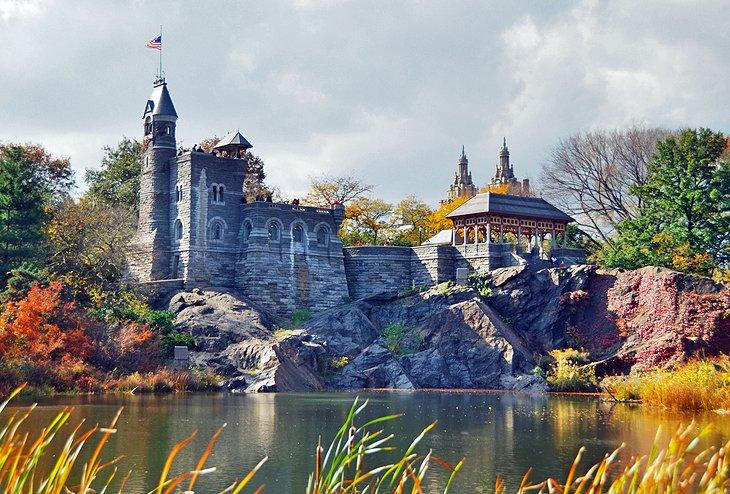 Belvedere Castle is a stone castle atop Vista Rock, offering a spectacular view of the park and the city from its rooftop lookout. Looking north, you see the open green space of the Great Lawn and the Delacorte Theater, where free Shakespearean productions performed by some famous names are held every summer. To the south is the forest area known as the Ramble.

It should be noted that the “castle” is not really a castle at all, but a miniature castle built in 1869 specifically to serve as a lookout within the park. It eventually fell into disrepair and was renovated and opened in the 1980s. Inside is a visitor center and gift shop.

The weather for Central Park is measured from the top of the castle. 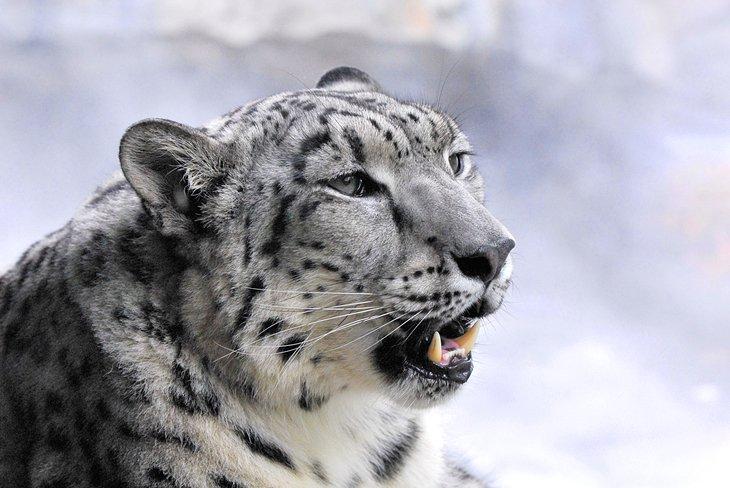 The Central Park Zoo features animals from the Asia, polar regions, and the California Coast. In the Temperate Territory, watch for red pandas, snow leopards, and snow monkeys. Head over to the Polar Circles to see the much-loved penguins. Other animal highlights include grizzly bears, California sea lions, and lemurs.

Also located at the zoo is a 4D Theater intended for visitors aged six and up. The theater charges a fee but is included with a Total Experience ticket.

Near the entrance is the charming Delacorte Musical Clock, where bronze animals encircle the time piece and play children’s songs or seasonal pieces every half hour. 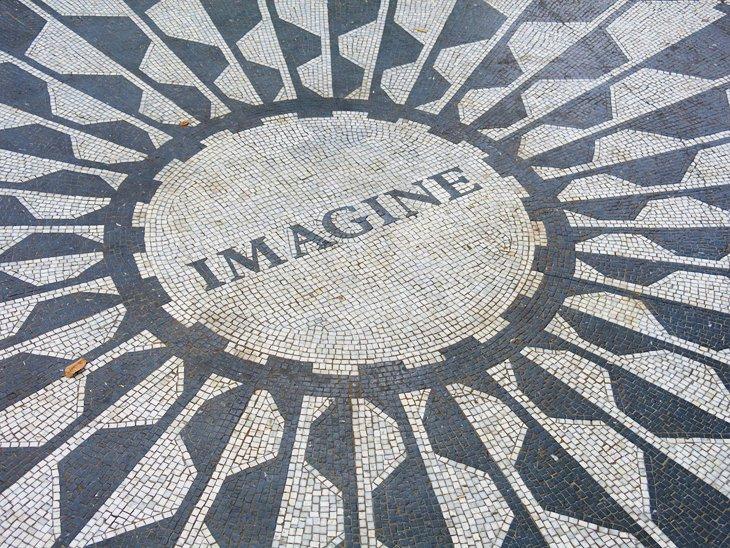 Located within Central Park, Strawberry Fields is a memorial to John Lennon, who was tragically murdered in front of the Dakota apartments just off the west side of the park. A mosaic is set in the pathway with the word “Imagine” inscribed, named after Lennon’s 1971 song.

The landscape was designed by Vaux and Olmstead and features 161 species of plants (one from every country in the world), and the area was named a Peace Garden. This area of the park is also a designated quiet zone

It is one of the main attractions in the park, and people often come here to have their picture taken with the memorial. 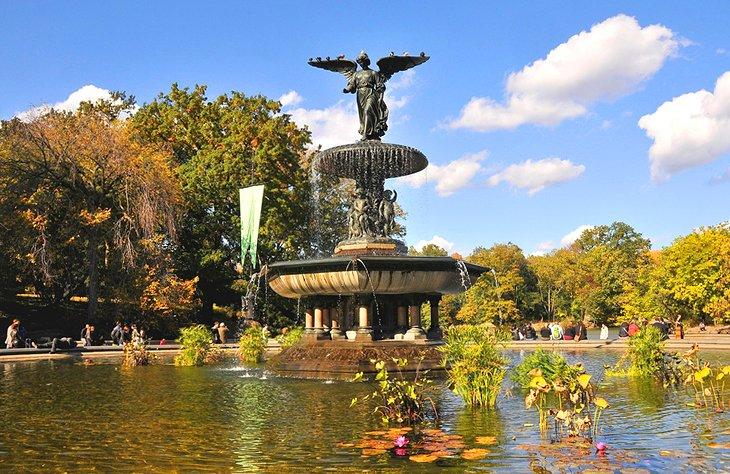 Bethesda Fountain on Bethesda Terrace stands between the Lake and the Mall, and is one of the architectural highlights of Central Park. The fountain was dedicated in 1873 and the statue, Angel of the Waters, in 1842. The Spanish-style detailing of the double staircase with tiles and friezes was done by Jacob Mould. The terrace is a popular place for photos and a pleasant area to relax. 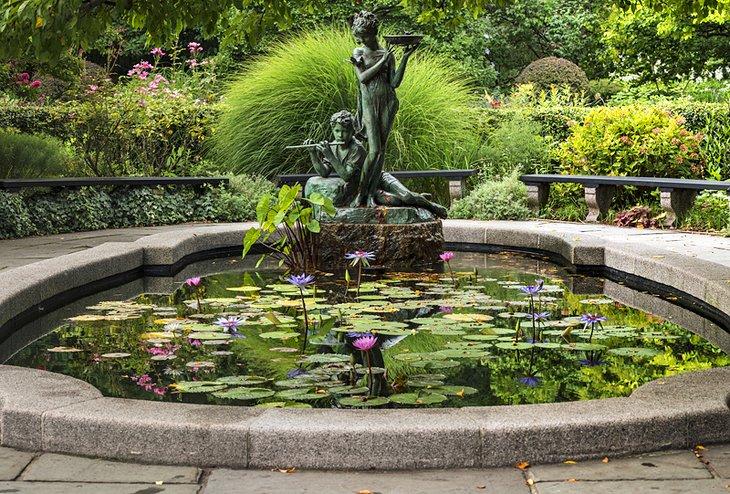 Conservatory Garden is a peaceful oasis, filled with thousands of trees and shrubs. Known for being the only formal garden in the park, this six-acre area has a much calmer atmosphere than other portions of Central Park, with no cyclists or skateboarders. It is frequently the setting for weddings.

The main entrance is through the large, wrought iron Vanderbilt Gate off Fifth Avenue. Inside, the garden is divided into three sections of different styles: French, Italian, and English. The French garden features the bronze fountain, Three Dancing Maidens by Walter Schott.

The gardens are particularly impressive in spring, when the fruit trees come into bloom and the tulips provide a showy display of color.

6. Loeb Boathouse on The Lake 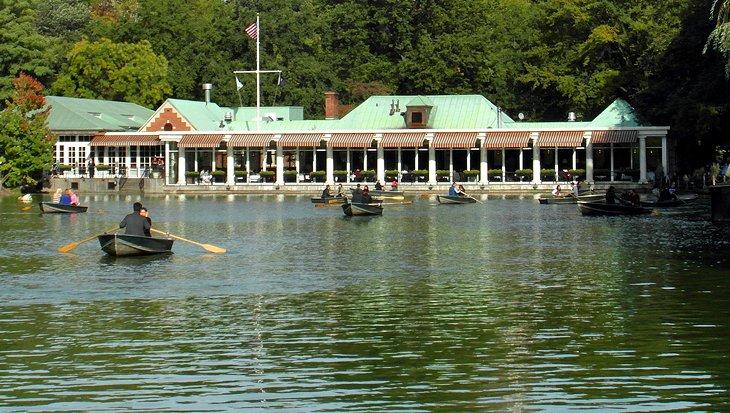 On the far eastern shore of The Lake, the beautiful Loeb Boathouse is a restaurant with an indoor dining room and an outdoor seating area, set right on the water’s edge. The picturesque setting here is often used for weddings and other formal events.

You can sit here on a warm afternoon sipping coffee or enjoying a meal while watching people row boats on the usually calm water. If you are looking for a little more activity, you can rent a boat yourself and go for a paddle around the lake.

7. The Mall and Literary Walk 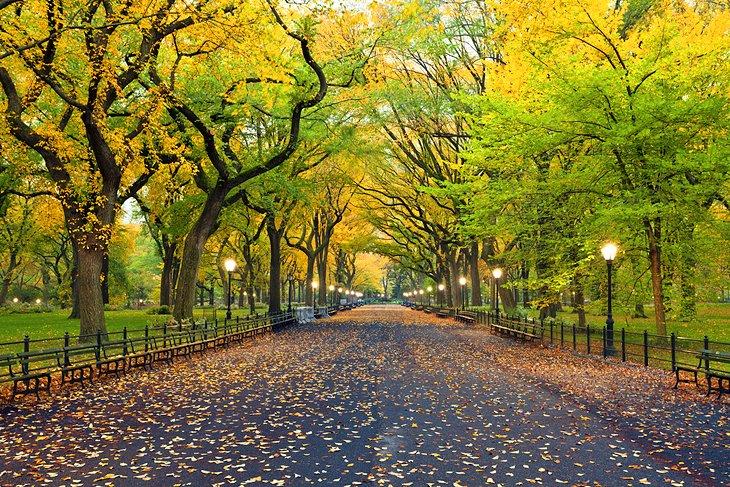 A lovely area for walking, the Mall is a straight, wide pathway running beneath a canopy of huge trees in the south end of Central Park. This spot offers a peaceful retreat from the busy streets of New York City and a chance to enjoy a little nature.

Even in winter, when the park is covered in snow, this is a great place for a stroll. Joining the Mall is the Literary Walk, lined with statues of literary giants that include Shakespeare, Robert Burns, and Sir Walter Scott, as well as others. 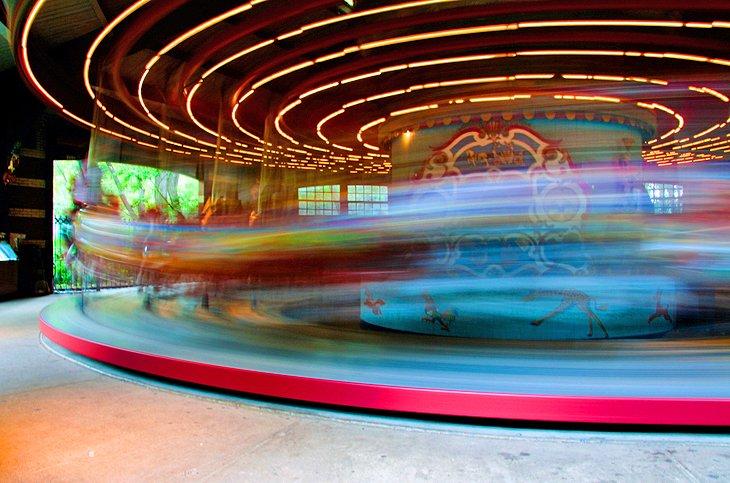 The Central Park Carousel has enjoyed a long tradition in the park, with the first carousel open for business in 1871. Although it was somewhat controversial when it first began operation, it quickly became a success. Today, hundreds of park goers ride the carousel each day.

The current carousel was added in the early 1950s and restored in the 1990s and features hand-carved horses. The carousel is currently under lease to, and operated by Donald Trump’s, Trump Organization, who has promised to invest hundreds of thousands of dollars in restoration over the coming years. 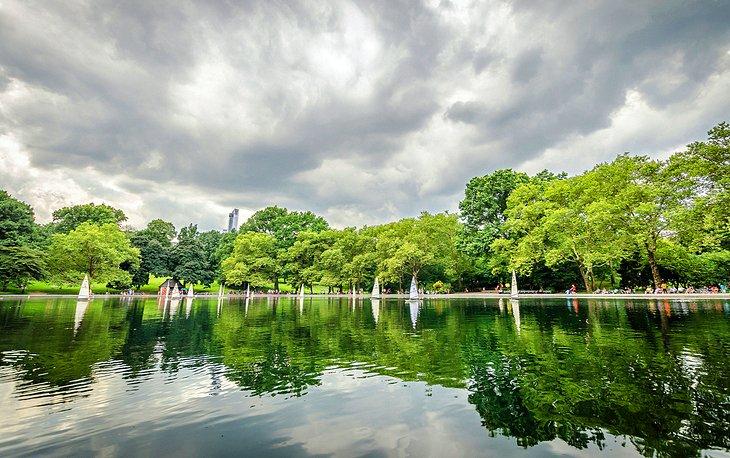 Conservatory Water, on the east side of the park near 72nd Street, is better known as the Model Boat Pond. People come here from spring until fall, particularly on weekends, to sail and race their model boats.

Benches around the shore, shaded by large trees, are a perfect place to relax and watch the action. At the north end of the water is a sculpture of Alice in Wonderland and on the east side is Kerbs Boathouse, with a café. 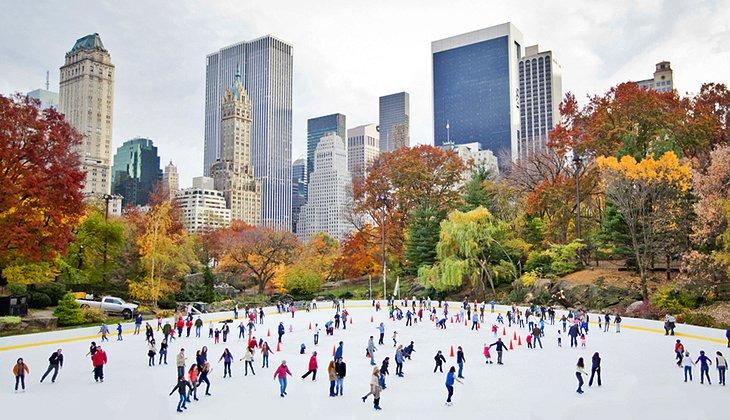 Skating in central park is a great family activity, but couples can also enjoy a romantic skate. This is a seasonal activity, open from late October to April, and if you are visiting New York in the winter, a skate in Central Park on a sunny day is a memorable event.

Two options exist for skating in the park: Located near the Central Park Zoo, the Wollman Rink offers outdoor skating for a fee in a beautiful setting, surrounded by trees. Skate rentals are available on-site, and spectators are welcome but they also have to pay a fee.

See also  How New York City Survives a Pandemic: Is Everything So Bad?

The Lasker Rink serves as a skating rink in winter and a swimming pool in summer. The fees are less than Wollman Rink. Both rinks only accept cash.

Where to Stay near New York’s Central Park for Sightseeing

We recommend these convenient hotels a short hop from Central park attractions:

Central Park is huge, and exploring it can seem daunting, particularly if you have already spent time walking around the city. Navigating through the park can be time-consuming and tiring. If you only want to spend an hour or two in the park, here are some easy ways to see the highlights.

TV and Movie Sites Tour: Central Park has been the setting for hundreds of movies and TV shows. To see where some of the most famous scenes were shot take the Central Park TV and Movie Sites Walking Tour. This is a two-hour tour that takes you to locations seen in Breakfast at Tiffany’s, The Avengers, When Harry Met Sally, Love Story, and Sex and the City. 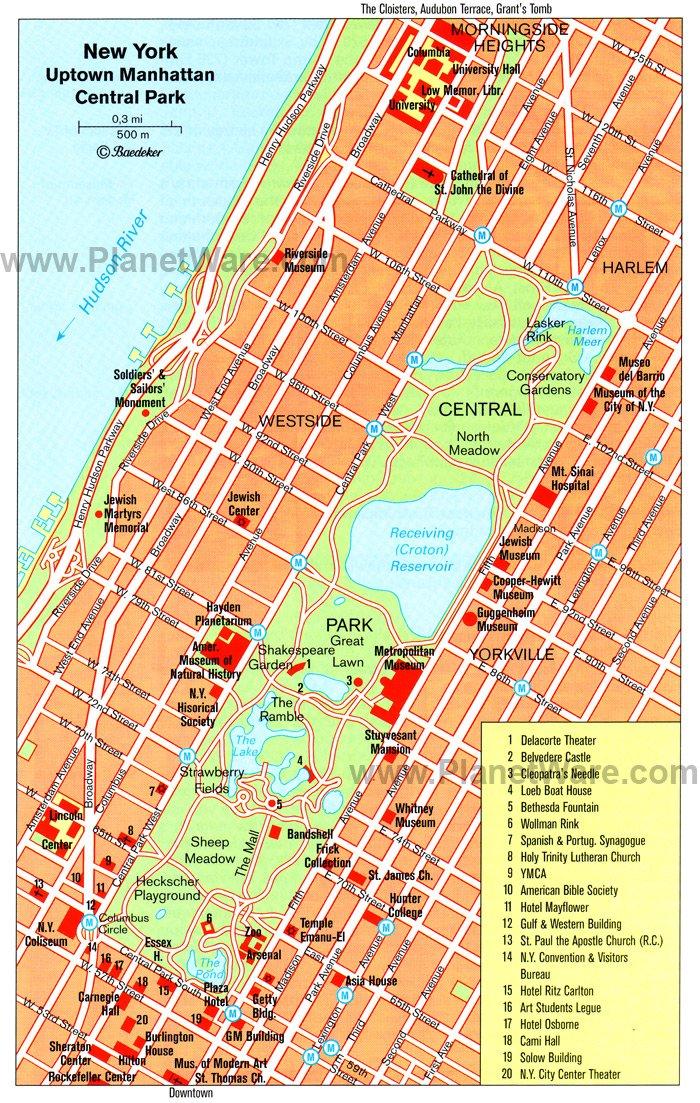