NYCity.media » Articles » 12 Most Fascinating and Unexpected Facts About New York

12 Most Fascinating and Unexpected Facts About New York

New York has always been mysterious and unpredictable. To once again make sure that you don’t know New York, as well as you, think – read the curious facts in our article.

Learning absolutely everything about New York is not an easy task. He always surprises and charms with his unpredictability and talent to change human lives. If you have lived in New York for a long time and it seems to you that you have studied it thoroughly and know everything about everything – do not rush to draw conclusions.

Things you may not know about New York

The main feature of the big apple has always been its contrast. If you are walking on one road, you should cross to the other side of the street and you will find yourself in a completely different universe. New York is the only city on Earth where there are cuisines of all countries of the world from and to, where everyone can start their life and find themselves in this stone jungle.

It is impossible not to love New York, which is why it always inspires directors and cinematographers for new films, about 250 films are released every year, which are set in New York! New York has inspired such great directors as Martin Scorsese and Woody Allen.

New York is one of the largest economic and cultural centers in the world, which is also a trendsetter and always supports the most daring undertakings of contemporary art, which is why we can say that New York is a place where absolutely no borders. In this city, everything and always depends only on you.

The unique space of this city is capable of discovering all the newest and best in all its inhabitants – it is in this city that a person can become “the best version of himself” and open himself up anew. If you are thinking about starting a new life and do not know where to do it, then New York is the best choice.

Here are some facts that will be a discovery for you.

In all corners of the world, people have heard about the name New York as “Big Apple” and call it that way, but not everyone knows about the origin of this name. There are many different theories about how New York got its name. The most credible of these is that the city got its name from an article about horse racing in a local 1920 newspaper. The term “Big Apple” was usually used to denote a large cash prize for the winner of a horse race, which was actively held in New York at that time.

2. The fact of how many languages ​​New Yorkers speak

New Yorkers in everyday life speak an enormous number of very different languages, because about 37% of the citizens of this city are newcomers, and English is far from their native language.

You might be shocked by this number, but currently, New Yorkers speak 800 different languages. Moreover, there are such languages ​​that are very rare even in the homeland of visiting citizens.

3. About half of the state’s population lives in New York City

It’s true. According to statistics, one in 38 people born in the United States lives here, which means that the population density of New York is approximately 27,000 people per square kilometer. New York can rightfully be called the most populous city in the entire United States.

4. The subway system can cause a headache here

The New York subway system has 34 lines and 469 stops, which is why it is a real challenge to understand this system. Just imagine, to get to each stop and drive along each line it will take you a whole day (namely, 21 hours 49 minutes – this is the current world record in this difficult discipline).

5. The Statue of Liberty was delivered to New York in parts for about 10 years 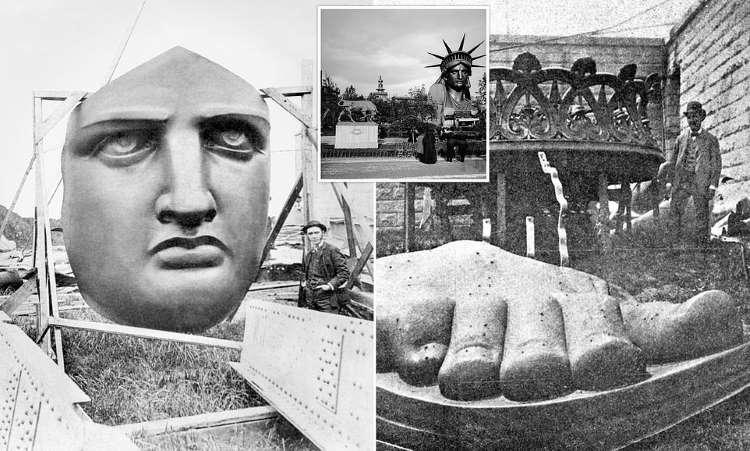 It is known that the Statue of Liberty is a gift from France for the centenary of the United States, but not everyone understands how hard it was to deliver this structure there and combine all the parts into one statue. The statue was assembled on Ellis Island for about 4 months, and it took almost 10 years to deliver all 350 parts to New York (from 1876 to 1885).

From colonial times to World War II, May 1 was Moving Day, one day in the year when New Yorkers moved. The tradition has come from the Dutch, who settled in Manhattan on May 1st and therefore celebrated this date every year by changing houses. There is, however, a more prosaic explanation: according to the rules, landlords had to notify their tenants of the increase in rent on February 1.

The price increase came into effect exactly three months later at 9 am. Therefore, the tenants waited until May 1 to move. From colonial times to World War II, May 1 was Moving Day, one day in the year when New Yorkers moved. This tradition is said to have come from the Dutch, who settled in Manhattan on May 1st and therefore celebrated this date every year by changing houses.

There is, however, a more prosaic explanation: according to the rules, landlords had to notify their tenants of the increase in rent on February 1. The price increase came into effect exactly three months later at 9 am. Therefore, the tenants waited until May 1 to move.

7. Ride the subway for the price of a slice of pizza

There is a pattern in New York: over the past 50 years, the price of one slice of pizza has almost always been the same as the price of a subway ride. True, it is not known which was the first – the chicken or the egg, that is, who was the first to raise prices – the subway management or the owners of pizzerias.

8. New York holds a quarter of the world’s gold reserves

It is not only a city of great opportunities and wealthy people (they say every 21 residents of the Big Apple are a millionaire, so take a look around) but also a city of gold bars. 25% of the world’s gold bullion reserves are stored 24 meters below the Federal Reserve Bank. The United States of America is the world leader in gold reserves today. America’s gold was initially collected during the Great Depression when the population and all organizations were obliged to hand over the gold at their disposal at a price of just over $20 per troy ounce.

During the Second World War, the reserves of the precious metal rose to astronomical figures by today’s standards of 20.2 thousand tons. In subsequent years, this gold was actively spent on stabilizing the American currency.

The history of Times Square is just over 100 years old, but during this time many events have happened here. In the middle of the 19th century, the area was called Longacre Square, it was lively, but did not present much interest. However, at the beginning of the 20th century, the Times Building was built here (designed by the architect Cyrus L.W. Eidlitz).

See also  Two Days in New York: How to Spend Time and Remember It for the Whole Life

At that time, the skyscraper became the second tallest after the Flatiron Building – it had 25 stories and a height of 120 meters. The editorial office of the New York Times moved here in 1904 from Park Row (the quarter of newspapermen). Hence the name Times Square.

10. Topless is allowed on the streets of New York

In 2013, New York City police strictly banned the detention of women topless – provided, of course, that they did not violate any laws. The world took the news with unprecedented joy, but, in the largest US city, it was never forbidden to go topless, although they were regularly arrested for this. It is hard to imagine that many New York women were seriously concerned about what threatens them for walking in an indecent, but extremely attractive form for men.

It is rather a matter of principle, and it was from the principle that the photographer and artist Holly Van Vost was regularly exposed on the streets of the city for several years.

Having painted herself a mustache and thereby turned into her alter ego named Harvey, Van Vost bared her breasts on New York streets, in front of schools, in restaurants. Once even in court (for this she had to apologize, and the judge, who was over 80 , admitted that he had never seen anything like it).

In 1640, the Brooklyn House was built, which until 1901 was residential. However, in 1965 it was named an official historical landmark of the city and still exists as a museum to this day.

12. Taxis in New York were originally green and red

One of the most recognizable symbols of New York is the yellow cab. But in fact, yellow taxis were used in other cities of the United States, while in New York, up to 1912, green and red cars were used.