New York is not for nothing called the capital of skyscrapers – this unique city is characterized primarily by high-rise buildings. He is not so many years old, but over these several centuries, he has already developed his own definite style, quite recognizable. And from all the diversity, it turned out to be the most difficult task to single out only the ten most beautiful buildings – after all, in such a large city there are more than one hundred houses with their own design, history, and soul.

In the entire scattering of houses of the Big Apple, we still managed to identify 10 pearls – houses from the category of “must see”, without seeing which, you cannot say with confidence that you know the city.

The Church of the Holy Trinity is a building with a complicated history. The first attempt to erect a shrine dates back to the very beginning of US history – 1697. But it was completely destroyed by fire, having stood for only 80 years. The next building lasted only 50 years, but it was already destroyed by water – it could not withstand heavy snowfall. 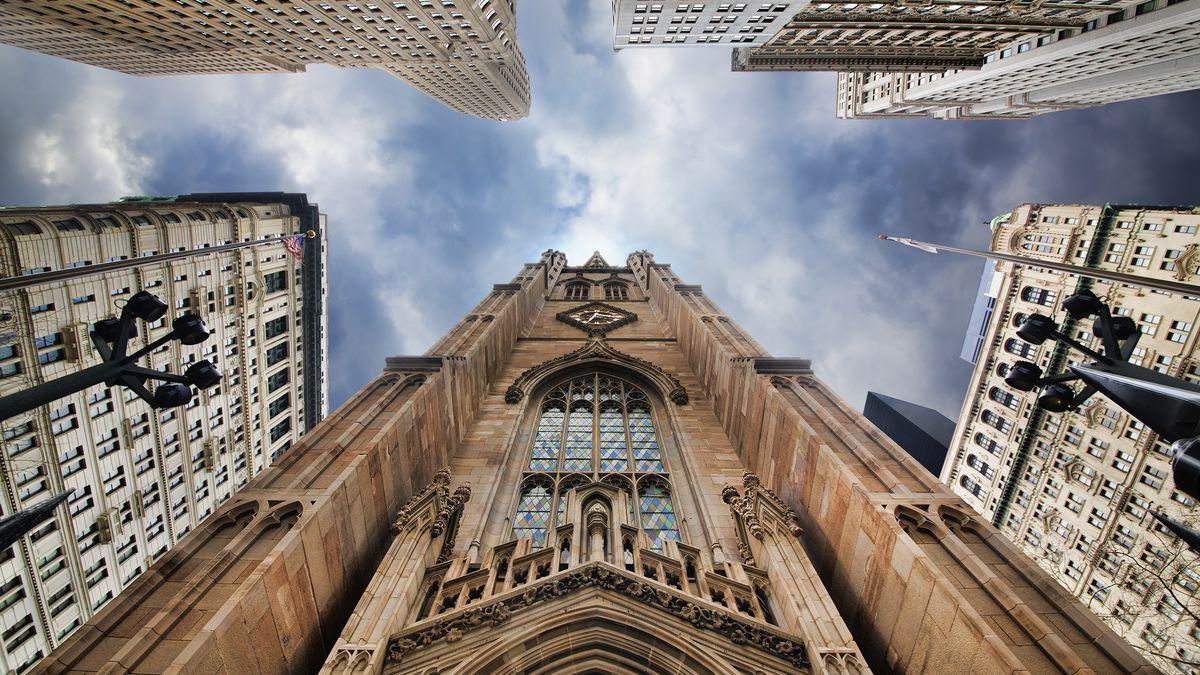 The third version of the church has been standing since 1846. The style of the building is Gothic, but quite recognizable and characteristic. Unusual bronze doors, interesting sculptures and 23 bells are a true masterpiece of master Richard Upjohn. 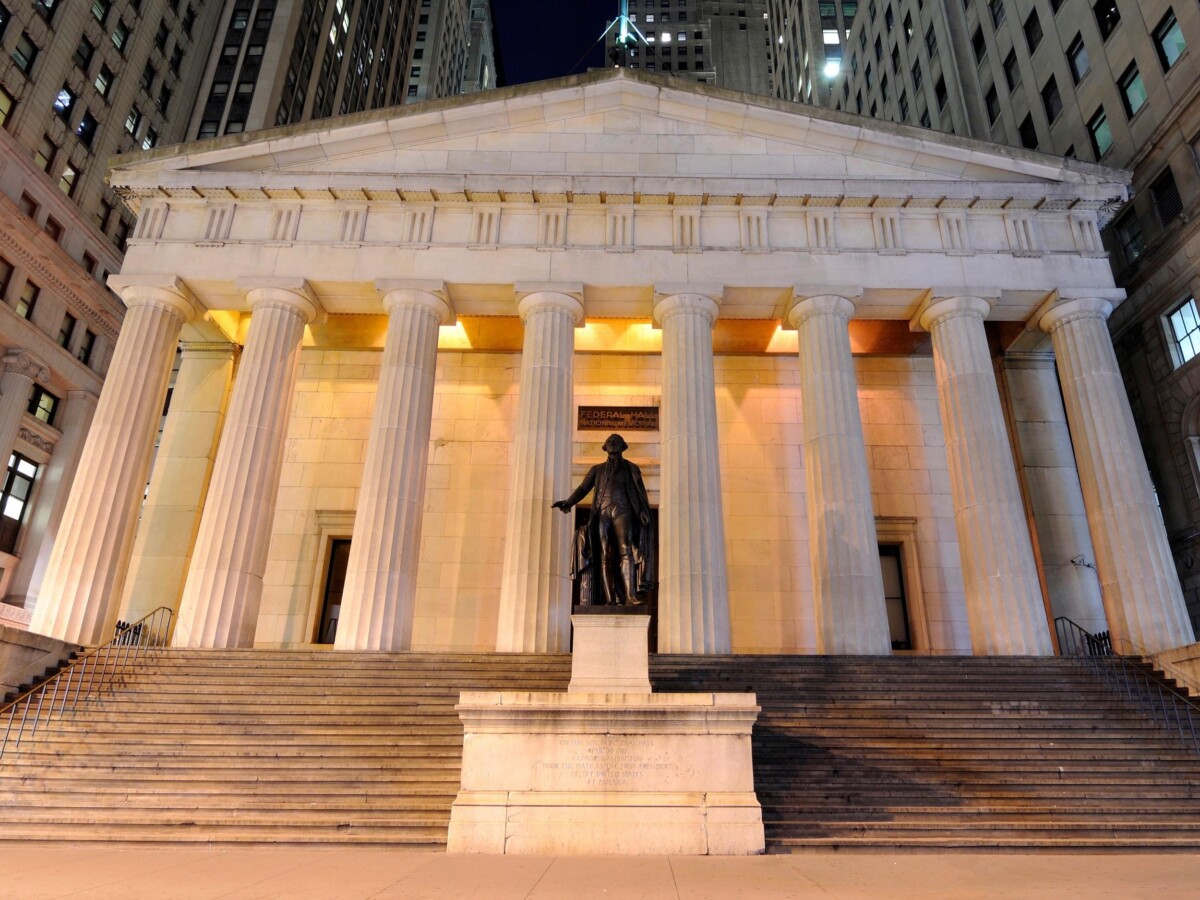 The Federal Hall is a monument from about the same time, but in a completely different direction. And again, the modern version of the building is not its first version. The building, erected in 1700, stood until complete destruction in 1812. The memorial has become a reminder of the times of George Washington and the War of Independence. The new building housed the New York City Hall for a long time until it became the National Memorial of the Federal Hall in 1942.

The statue of George Washington at the memorial is considered one of the finest works of sculptor John Quincy Adams Ward. Created in 1882, it immediately took its place of honor in the federal hall. Additionally, the memorial is decorated with Doric columns in memory of the birthplace of democracy – ancient Greece. Also worth mentioning is the unusual dome – an allegory of the Roman Republic.

One of the most elegant buildings in the city is St. Patrick’s Cathedral. The construction was completed only in 1878, when a new direction in architecture dominated – neo-Gothic. It was this style that was chosen for the cathedral by its creator – James Renwick Jr. it is also one of the largest buildings in terms of area, as it occupies an entire block.

The highlight of the cathedral is its windows and stained-glass windows, which create a fantastic play of light and color inside the building. The statue of the Pieta by William Ordway Patridge also attracts the attention of tourists.

The Dakota Building was originally planned as a luxury home. And since 1884, when the construction was officially completed, living here became prestigious, but expensive. The building has turned out to be a success – the influence of European architects is captured in the beauty of the facade.

In addition to its appearance, the house has always maintained a reputation for respectability – it had its own electric generator and central heating. Even now, more than a century later, apartments in Dakota are still considered prestigious.

See also  Best Manhattan Museums: Add Them to your List

The Flatiron Building in New York is better known as “Iron” – the resemblance to this particular household appliance is immediately striking. At one time, the 22-story brainchild of architect Daniel Burnham was one of the tallest and most original buildings in the city.

The facade is made in the form of a Greek column, and the whole house is perfectly integrated into the block. By the way, city fans compare the symbolic building not with an iron, but with the bow of an ocean liner crashing into the waves. However, you have the opportunity to choose the most appropriate epithet yourself.

The most luxurious building of the Big Apple is undoubtedly the Plaza Hotel, in which everything is luxurious – from the entrance to the last ashtray in the room. The hotel opened in 1907 and immediately became one of the favorite attractions of New York.

The hotel overlooks the central park, on the square near the hotel, there are several beautiful statues, including the famous General Sherman on horseback. Everything is beautiful in the hotel – the building itself, its interiors, the surrounding area. But don’t forget that this is one of the most expensive hotels in the city.

Such an international city could not do without the influence of Italy and Italian culture. The most prominent representative of the Italian Renaissance style is the Apthorp, built in 1908. The most beautiful graceful architecture, arches and openings. And just a gorgeous courtyard with greenery and fountains in the middle of the urban jungle.

See also  8 Locations for a Special New York Sunset: Where to See Beauty with Your Own Eyes

This building is one of the most fashionable in the city, apartments in it are very expensive, but they are ready to pay for such an oasis in the center of skyscrapers.

The competition for the tallest building has been conducted in New York since its foundation, and it was the Woolworth Building that held the palm for 17 years at the beginning of the 20th century.

The building was designed by Cass Gilbert and originally had 60 floors, which was incredible for 1913. The beauty of the building is also beyond doubt – the Gothic style, beautiful interiors, vaulted ceilings. The finishing touch is the magnificent stained glass windows. So, after admiring the building from the outside, be sure to look inside – it is beautiful.

The American Radiator Building, which eventually became the Bryant Park Hotel, is impressive at first glance, with an emphasis on black and gold in its construction.

Built-in 1924, it has become a great accommodation option overlooking the park and city and immediately striking with its elevation above the block. From the upper floors, the views of the city are truly magnificent.

This pinnacle of architectural thought is the first thing that catches your eye when looking out from Central Park, and it’s truly amazing. San Remo was designed by Emery Ross and construction began in 1929.

It was the first two-tower apartment complex in New York, and the towers were designed in the style of English mansions, highlighting the sheer luxury of San Remo. This is a great option to stay if you want to experience the atmosphere of twentieth-century New York.